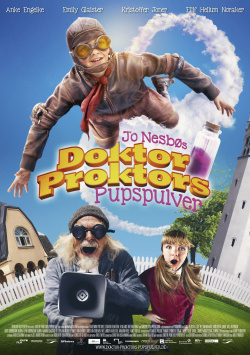 Jo Nesb&oslash;, known for rather dark, very adult material such as the detective stories about Inspector Harry Hole, can also be different. Since 2007 he has been delighting very young readers with his stories about the crazy inventor Doctor Proktor. The first of four Proktor books to date, with the wonderful title Doktor Proktors Pupspulver (Doctor Proktor's Fart Powder), has now been filmed as a German-Norwegian co-production in Erfurt and Oslo. The whimsical story centers on two children, Lise (Emily Glaister) and Bulle (Eilif Hellum Noraker), who sneak into the home of the supposedly mad inventor Doctor Proktor (Kristoffer Joner) against all warning. They quickly discover that the shy neighbour is a very friendly man who has made some great inventions.

The children are particularly fascinated by his fart powder. They are sure: there is mighty money to be made in school with that powder. For farts that don't stink but make you fly are the best thing a child could wish for. But the evil Tharne (Atle Antonsen), who always steals Proktor's inventions and passes them off as his own, is also after the fart powder. He wants to sell it to NASA for a lot of money as a rocket engine. To get his troublesome rival out of the way, he unceremoniously has Proktor thrown into prison along with Bulle. Can Lise rescue the two from this dicey situation? And what does a giant snake that lives in the sewers have to do with the whole thing?

Doktor Proktor's Fart Powder is a shrill, colourful, wacky children's film that scores points with its rather anarchic, yet absolutely target-group-appropriate humour and charming characters. Not only unusual camera angles, but also hairstyles, costumes and equipment make sure that this book adaptation clearly stands out from other children's films. However, it is also a bit very special, which a broader audience might have problems with. In addition, the appearance of the giant snake is very scary for very young viewers, which caused one or two anxious whimpers among the kindergarten groups that were present at the press screening.

The fart jokes already threatened in the title, on the other hand, work really well with the little ones, especially at the beginning, and cause uproarious laughter. However, they are eventually overused a bit too much, so that the laughs increasingly diminish and the film has a hard time keeping the children's attention to the nice story until the end. But even if adult companions will find most of the gags hard to get along with, and there are a few minor hang-ups for the target audience, Doctor Proctor's Fart Powder has become a pleasantly mismatched, original and delightfully charming children's film, with a sequel already being filmed. So a reunion with the unusual inventor and his friends is certain. For viewers between the ages of 5 and 10 who like things a little quirkier and more colorful, this first visit to Doctor Proctor is definitely: worth seeing!