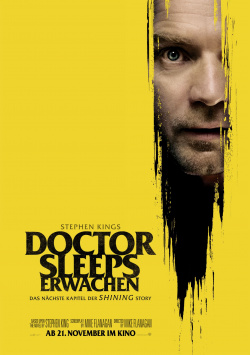 Decades have passed since Dan Torrance (Ewan McGregor) was confronted with the traumatic events at the Overlook Hotel as a child. He has since come to terms with his past as well as his ability, the Shining. But the ghosts of his past catch up with Dan when he meets young Abra (Kyliegh Curran), who, like him, has the Shining. It is this psychic power that has brought the two together. But Abra isn't the only one who can sense the Shining in others. The members of the True Knot led by the ruthless Rose the Hat (Rebecca Ferguson), in their insatiable thirst for immortality, are also on the lookout for people with the Shining to feed on. Together, Dan and Abra plan to take on Rose the Hat - but to do so, Dan must face the demons of his childhood.

Doctor Sleep's Awakening continues the story of Danny Torrance 40 years after The Shining. Director and screenwriter Mike Flanagan, who made his name with genre fans with the Netflix series Haunted Hillhouse, has already delivered a compelling King adaptation with The Game. With the sequel to the classic The Shining, Flanagan has achieved a small feat: on the one hand, he sticks very closely to the novel for long stretches. On the other hand, he also pays tribute to Stanley Kubrick's film version, which King himself didn't appreciate quite as much. Thus his film is equal parts continuation of the book and its (first) film adaptation.

This follows closely in time to the events at the Overlook Hotel. Clearly, the roles of young Danny Torrance and his mother have been recast for these scenes. However, the decision to occasionally show little flashbacks of scenes from Kubrick's film with the original actors seems a little odd, which just doesn't quite feel like fitting together - and could well confuse viewers who haven't seen The Shining in particular. Other than that, there's little to fault in Flanagan's film. Ewan McGregor delivers a really strong performance, but is still outplayed by his female co-stars.

While Kyliegh Curran proves to be a real new discovery, who will definitely be seen more of, Rebecca Ferguson as a cold-blooded supernatural killer can send shivers down the audience's spine. You can tell Ferguson enjoyed playing such an evil character for once. And when Rose the Hat is really in her element, the film can definitely get disturbing and gory. But there are also plenty of quieter moments where Flanagan gives the characters and the story time to develop.

The final act, which takes Danny back to the Overlook, is undoubtedly one of the highlights of the film. The set designers in particular have done a great job here of recreating the settings of Kubrick's film as faithfully as possible. Even if a key scene here doesn't quite leave the impression the makers were probably hoping for (for obvious reasons that won't be revealed here), the finale is a thoroughly worthy bow to the 1980 classic film.

Admittedly, Doctor Sleep's Awakening has some minor flaws. But overall, it's one of the better King adaptations with great actors, some very intense moments, and a very well done final act. For that, it definitely gets a: Absolutely worth seeing!