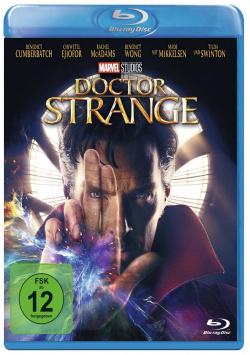 Movie: Dr. Stephen Strange (Benedict Cumberbatch) is one of the best neurosurgeons in the world. His enormous talent is matched only by his arrogance. His work is his life - and it goes completely off the rails when, after an accident, he can no longer move his hands the way he needs to in order to perform difficult operations. No specialist can help him, no operation, no matter how expensive, can fully restore the mobility of his fingers. In his desperation, he opens himself up to healing arts beyond modern medicine. Supposedly, there is a place - Kamar-Taj - that can work wonders for cases like his. When he arrives there, he quickly discovers that it really is a place full of miracles and magic. And suddenly his hands are no longer the central problem, as Doctor Strange finds himself in the midst of a battle against dark forces that explodes not only our reality, but every known dimension.

Doctor Strange is the next MARVEL superhero to make it to the big screen. Unlike his counterparts Iron-Man, Spider-Man, Hulk or Thor, the master of the mystic arts is probably really only a household name to comic book connoisseurs - and that's despite the fact that he first saw the light of day in the comic book world back in 1963. But just like Ant-Man or the Guardians of the Galaxy, Doctor Stephen Strange will no longer be an unknown hero after this film at the latest. Because his big screen debut is absolutely successful. This already starts with the visual realization, which puts elements from Inception or Matrix into a blender, adds a little Far Eastern mythology, spices the whole thing with a proper shot of magic and conjures up a 3D spectacle of the particularly worth seeing kind.

Sure, the wheel is not reinvented here. And in places the story is also a bit confused. But you should never forget that this is about magicians who can move in different dimensions and bend and twist our reality as they please. If you're looking for logic or plausibility, you're in the wrong place. But if you can just let yourself fall into this fantastic world, you'll get your money's worth. This is not only because of the great effects, but also because of the really good actors.

Benedict Cumberbatch moves on very safe terrain, his Doctor Strange is not too far away from the characters he masters with bravura in other ways. But the mix of arrogance and self-deprecation he performs here is just really fun to watch, especially when he interacts with Tilda Swinton or Benedict Wong. As Kaecilius, Mads Mikkelsen is one of the best villains from MARVELLS cinematic universe in recent times. This is not only due to Mikkelsen's acting, but also due to the fact that Kaecilius' motives are laid out quite clearly and openly, making them understandable to the audience (which was not the case with, say, Ultron from the second Avengers movie).

Director Scott Derrickson (Sinister) has done a very good job of literally adding a new dimension to the familiar MARVEL world. In doing so, he provides a bit of a breath of fresh air in the superhero universe. It may be that the film has its weaknesses or small lengths. But all in all, this is a first-class fantasy adventure with high visual values, great action and a good portion of humor. Not the best film in the MARVEL universe, but a damn good one. And so the announcement in the end credits that Doctor Strange will return (supposedly as early as the next Avengers movie) definitely provides some anticipation. After all, there is a very clear for this successful debut: absolutely worth seeing!

Picture + Sound: As was to be expected, Disney and Marvel also offer their viewers the best quality in the home theater. The picture is absolutely clean, the sharpness is excellent and the colors are mixed very powerfully. The 2D version also pleases with a pleasant image depth and excellently matched contrasts. The sound comes in a very powerful DTS-HD HR 5.1 mix that really lets it rip, especially in the action scenes. But also music and dialogue come out of the home theater boxes well matched to each other. Very good!

Extras: The bonus material starts with a very interesting and listenable audio commentary by Scott Derrickson, which he recorded before the theatrical release, not knowing how the film would be received by audiences. This makes the commentary pleasantly honest and very informative. Continuing on, there are five Making Of featurettes that can be viewed individually, but also in one piece (together approx. 58:05 min.). Here the viewer learns more about costumes, music, the filming, the sets and locations, the characters and about the visual effects. Together, this makes for a neat making of worth watching.

Continues with a brief look at Phase 3 of the Marvel movies with brief glimpses of what fans can expect in the coming months (about 7:08 min.). This is followed by a very amusing short about Team Thor (approx. 4:38 min.), where we learn that Thor isn't necessarily a good loser at party games. Five extended or additional scenes (approx. 7:52 min.), as well as a few gags from the shoot (approx. 4:12 min.) round out the good additional offerings.

Conclusion: Doctor Strange manages to literally add a new dimension to the familiar MARVEL world. The film has some flaws, but manages to score with great actors, great effects and an extremely high entertainment value. The Blu-ray presents the film in very good picture and sound quality and also has some worth seeing extras on board. For this there is a clear: Absolutely recommendable!