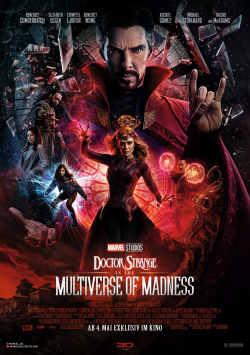 Doctor Strange in the Multiverse of Madness

I want to start this review with the promise that I will reveal as little as possible about the plot, cameos, and other surprises. However, it won't be entirely without spoilers. But these will really be reduced to the most necessary. I promise! Because what I can reveal with the best of conscience is that "Doctor Strange in the Multiverse of Madness" is most fun when you go to the movies with as little prior knowledge as possible. However, it should also be said that expectations should be dialed down a smidge. A similar effect as last "Spider-Man: No Way Home" this film will not trigger. Why, in addition later more.

Now however only once to what may be betrayed over the history: Just Steven Strange (Benedict Cumberbatch) had made unpleasant experiences with the Multiverse. No sooner is the gateway to other worlds closed than young America Chavez (Xochitl Gomez) shows up and reveals to Doctor Strange that she has the ability to jump to other worlds. And someone wants to take advantage of this ability - which could become a threat to the entire multiverse. Promptly Strange and his America are on a journey through different realities to save them from the powerful threat...

What was not all speculated in advance, what will happen in this film and who all will make an appearance here. Of course I will not reveal these secrets. But I have to say, at least for me, that the big surprises are missing. Thus, the enormously high expectations that I had just after "Spider-Man: No Way Home", has not really been met. Much of what is supposed to surprise was simply already hinted at in the trailers. Real "What the..."- moments there were for me unfortunately not. The only thing that really surprised me was how clearly the signature of director Sam Raimi, who returns to Marvel here 15 years after completing his "Spider-Man" trilogy, can be felt. One might even go so far as to say that the "Evil Dead" creator has directed the first Marvel horror film - with his trademark camera effects and wry humor. Not all MCU fans will like it. But Raimi fans will love it!

It must also be said that it is helpful (if not necessary) if you know the Disney+ series "WandaVision" and "What if...". For it is to the former that the film refers again and again very intensively. While the story works without this prior knowledge, there is one important aspect regarding Wanda that is simply only comprehensible if you know the series.

I may sound a bit disappointed overall. I would neither deny nor affirm that. I was extremely well entertained, I liked the little horror interludes and Raimi's visual style, which is rather unusual for the MCU. The fact that the film is a bit "crazy" overall is also a welcome change. On the other hand, I expected a bit more from the play with alternate realities. For a movie that has the multiverse in the title, there is simply too little multiverse. And I found the obligatory mid-credit scene hinting at another part really disappointing (quite the opposite of the after-credit scene, which is a feast for all Raimi fans!).

All in all, "Doctor Strange in the Multiverse of Madness" is a good, partly delightfully weird, then again surprisingly dark MCU film, which unfortunately does not fully exploit its potential. At least Sam Raimi was allowed to really let off steam again, which ultimately consoles over minor criticisms. In addition, there is the great ensemble, from which Elizabeth Olsen as Wanda and newcomer Xochitl Gomez stand out particularly positively. Therefore there is then also under the line quite clearly one: Absolutely worth seeing!

One more small note: Before the film there is the first trailer to AVATAR: THE WAY OF WATER to see (first exclusively in theaters, a week later then also online). The long-awaited sequel to James Cameron's mega-blockbuster is expected to hit theaters in December. The first pictures look spectacular again, but after this teaser it is impossible to judge if the story will be convincing. At least you can dive into the fascinating underwater world of Pandora, which looks really great. Fans are guaranteed to be thrilled. But the very big WOW, THAT I MUST SEE effect has not yet set for me after the just under 1min clip.

Cinema trailer for the movie "Doctor Strange in the Multiverse of Madness (USA 2022)"
Loading the player ...