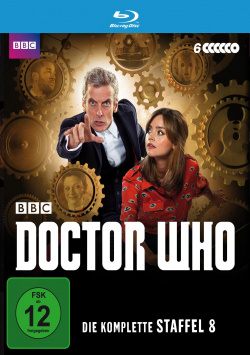 Content: Although the Doctor was actually convinced he wouldn't be able to regenerate again, after a tearful goodbye, his companion Clara Oswald (Jenna Coleman) is surprised to suddenly find a new Doctor (Peter Capaldi) standing before her. This one seems not only older and grumpier, but even more eccentric than his previous self. And yet there is no doubt that he is the Time Lord, at whose side Clara will continue to travel through space and time to experience many exciting adventures. In the process, the unequal team encounters not only familiar enemies such as the Daleks and the Cybermen, but also a dinosaur in Victorian London, a Robin Hood who is too much like legend to be truly real, or a deadly mummy on the legendary Orient Express. But more and more Clara feels the need to live a normal life. Especially when she meets and falls in love with teacher Danny Pink (Sam Anderson), she sees her time at the Doctor's side coming to an end. But travelling in the TARDIS has long become such an integral part of her life that she just can't stop. And so she must lie to the two men who mean the most to her and continue to lead a double life - and it has dramatic consequences...

After its big anniversary, Doctor Who takes a slightly new approach in its eighth (actually 34th) season. Because after the Eleventh Doctor Matt Smith said goodbye to his fans with the 2013 Christmas special, the creators didn't opt for a young successor again. Instead, 56-year-old Scot Peter Capaldi was signed on as the twelfth Time Lord. This, of course, changes the dynamic between the Doctor and his young companion Clara. While there were sparks between her and Smith's Doctor on a romantic level, this is completely absent in his successor. Still, Clara is torn between her affection for the quirky Time Lord and the longing for a normal relationship she could have with her colleague Danny. What emerges from this discrepancy undoubtedly makes for the most emotional moments of this season.

As is so often the case with Doctor Who, the quality of each episode varies considerably. To be sure, there are no outright disappointments. Still, Capaldi's debut in particular works nowhere near as well as, say, the great finale or the beautifully creepy episode Listen Too. But overall, the good episodes clearly outnumber the bad. The delicious cabbles between the Doctor and the supposedly real Robin Hood, a robbery of the supposedly safest bank in the universe, an eerie ride on the Orient Express, or the sudden appearance of giant forests on Earth are among the highlights, as is the mysterious Missy, who keeps popping up throughout the season and who reveals her true, surprising identity at the end.

Although Peter Capaldi's Doctor has a distinctly darker and quirkier side to him than his extremely popular predecessors Matt Smith and David Tennant, after a few episodes he manages very well to put his own unique stamp on the cult character, through which he quickly grows on viewers. Capaldi's talent for comedic timing, which pays off in the episode in which the Doctor works as a janitor at Clara's school, for example, as well as the fact that he can also be fully convincing in dramatic scenes, quickly dispel any initial doubts as to whether he really was the right choice. And it also becomes clear at least as quickly that he and Jenna Coleman have perfect chemistry. The fact that Coleman has decided to remain loyal to the series for another season is therefore really good news for all fans.

Season 8 of the new Doctor Who series proves once again that even after more than 50 years, the cult series can still fascinate, entertain and surprise and has its own unique charm that no other series has been able to copy. A successful debut for Peter Capaldi, who as the twelfth Doctor actually manages to add a few new nuances to the character. The numerous successful episodes and the good interplay of Capaldi and Jenna Coleman allow only one conclusion: Absolutely worth seeing!

Picture + Sound: Technically, there is no reason to complain about the conversion of the new episodes for the Blu-ray. The picture is absolutely clean, detail sharpness is at a high level and colors come across very powerfully. For a TV series, this is truly excellent. The sound is in a pleasantly dynamic DTS-HD 5.1 mix, which repeatedly offers really good, powerful surround effects, but at the same time also transports the dialogue well understandable from the speakers. For this there is a very clear: Very good!

Extras: With the bonus material, the makers have given themselves as with the previous season boxes really a lot of effort. So fans are offered in addition to some audio commentaries still almost 6 hours of extras. The first disc contains two commentaries (on episodes 2 and 3) as well as a short prequel to the first episode (approx. 5:59 min.). The first episode also played in many cinemas and the prequel was apparently intended to help some non-fans get into the world of Doctor Who. The second Blu-ray then has two more audio commentaries on episodes 6 and 7 on board.

On the third disc is the first very watchable documentary. In Doctor Who - The Ultimate Time Lord (approx. 43:05 min.), Fifth Doctor Peter Davidson explores the question of what makes the perfect Time Lord. To do so, he meets with former cast members of the Doctor, looks around the set, and chats with new Doctor Peter Capaldi. To go along with this, the fourth disc features the documentary Doctor Who - The Ultimate Companion (approx. 45:28 min.), in which Davidson takes a look at the Doctor's many companions. In the process, he meets John Barrowman, Noel Clarke, and David Tennant in addition to Jenna Coleman. In addition to this longer documentary, the fourth disc also has some very short featurettes on the new TARDIS (approx. 1:53 mins), the casting of Peter Capaldi (approx. 2:15 mins) and the writing of the new season (approx. 2 mins). Furthermore, the questions of who or what Doctor Who actually is (approx. 2:14 min.) and why you should watch season 8 (approx. 1:53 min.) are clarified. A music video of Foxes performing in an episode (approx. 3:19 min.) rounds out the supplemental material on this disc.

Continuing on Disc 5, fans will find a brief behind-the-scenes look at each episode. Over two hours of material are offered by the clips, each lasting about 10 minutes - and almost every minute of it is absolutely worth watching. In addition, there is a question and answer session on the first episode (approx. 28:23 min.), which was held following the theatrical premiere. Another documentary accompanies the team on a world tour (ca. 46:43 min.) through 12 cities on five continents and shows what a worldwide phenomenon the series has become. In addition to four trailers, there is then probably the most unusual extra of the box. The five(ish) Doctor Reboot (approx. 30:54 min.) follows Peter Davidson (5th Doctor), Colin Baker (6th Doctor) and Sylvester McCoy (7th Doctor) in their adventurous efforts to become part of the big anniversary episode, for which they are not actually intended. In one of the film's most amusing scenes, they get help from John Barrowman, whose big secret is revealed here. With a lot of self-mockery, the homosexual Torchwood star provides a really good laugh here. Fans will also find countless references to the series in this film, which reveal in a pleasant way that the creators do not take themselves quite so seriously.

Disc 6, on which the Christmas special of 2014 can be found, has to offer in addition a look behind the scenes (about 13:26 min.), as well as an audio commentary. With the exception of the commentaries, all of the extras have optional German subtitles. Here, quality and quantity is right - and for this there is clearly a: very good!

Conclusion: After a somewhat bumpy start, the eighth season of Doctor Who with its new Doctor Peter Capaldi quickly runs up to top form. The twelve new episodes and the Christmas special not only offer a reunion with old enemies like the Daleks and the Cybermen, but also confront the Doctor and Clara with all-new, exciting and extremely entertaining threats for the viewer. There are again several very amusing moments, but also a lot of adventure and action. And the plotline around Clara and the teacher Danny Pink even goes to the heart at the end. On Blu-ray, the series presents itself in first-class picture and sound quality. And also with the extensive bonus material, fans once again get their money's worth. For the bottom line there is then also a clear: Absolutely recommendable!