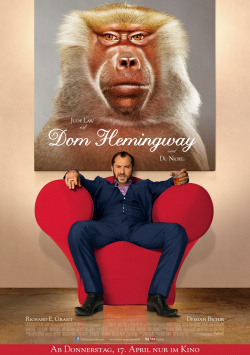 Twelve years the brilliant, extreme cocky safecracker Dom Hemingway (Jude Law) has for the gangster boss Mr. Fontaine (Demian Bichir). Now Dom is finally free again and wants to be rewarded accordingly for his loyalty. Together with his buddy Dickie (Richard E. Grant), Dom heads to France to see Mr. Fontaine to collect his money. But his libido, fueled by the sight of Fontaine's sexy girlfriend Paolina (Madalina Ghenea), combined with alcohol and his uncontrollable aggression almost ensure that this venture ends in a bloodbath. At the last moment Dom is able to smooth the troubled waters and he gets his money. Now it's time to party - and of course the best way to do that is with alcohol, drugs and women. But the party is followed by a nasty hangover: there is a death and all the money is gone. Dom, of course, doesn't take this lying down.

Already in his comedy Murder and Margaritas, director Richard Shepard unleashed a very weird gangster on movie audiences. But compared to safecracker Dom Hemingway, the hitman played by Pierce Brosnan was a cultured orphan. From Dom Hemingway's opening monologue, in which Dom hurls an extremely flowery paean to his penis at the camera, it's clear to the viewer what kind of self-absorbed guy you're dealing with here. But that's not all. Hardly a sentence leaves the lips of the ex-con without being embellished with at least three obscenities. And the fact that he is quick to let his fists do the talking and thinks more with his loins than with his coked-up brain doesn't exactly show a high level of sophistication. And yet: even though he's a real puke, Dom Hemingway isn't really unsympathetic.

That's not so much because of his behaviour, but because of the performance of Jude Law, who obviously had a lot of fun playing this rather unusual role. Similar to James McAvoy in Drecksau Law is allowed to throw every form of political correctness overboard and play a morally broken character without any restraint, who is nevertheless somehow a sympathetic character. Watching Law completely free himself from his image is quite a pleasure. And his co-stars Richard E. Grant as Dom's reserved counterpart and Demian Bichir as a glossy mobster also perform here with infectious gusto.

But what Dom Hemingway lacks is a mature script. Shepard relies too much on his title character's foul mouth and some absurdly amusing moments, but he seems to lose sight of the actual plot more and more. On top of that, he keeps a rather leisurely pace at the beginning and takes a lot of time for lengthy dialogue sequences, but at the end he really rushes through the finale. The last act, in which Dom's daughter Emilia Clarke, played by Game of Thrones dragon mom, appears, slides into an extreme superficiality and seems dramaturgically unfinished. Especially the plotline around Dom's daughter could be taken out completely without it really missing from the movie. If the whole thing would have been worked out a bit more carefully and in return some of Dom's too long monologues would have been cut, Dom Hemingway could have been an excellent gangster comedy. As it is, however, the whole thing comes across as a bit too unwieldy and too forced to really be as cool and non-conformist as the film would obviously like it to be.

However, if you like British gangster comedies with deep black humour, you'll still be well served here. The truly great Jude Law and some delightfully wicked moments ensure that the entertainment value is very high, especially in the first half of the film. But the rather half-baked plot of the last 30 minutes and the sometimes too strained scurrility of the production tarnish the positive overall impression, which is why in the end it is only enough for a with restrictions worth seeing!