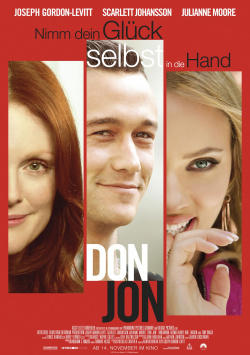 There's nothing new about actors trying their hand at directing. Dustin Hoffman, James Franco, Natalie Portman or Anthony Hopkins, they and many of their colleagues have succumbed to the allure of not just being in front of the camera anymore, but also behind it for once. This can succeed, but it can also go horribly wrong. Now Joseph Gordon-Levitt has also decided to broaden his artistic horizons and not only star in his new film, but also write and direct it. And from the fact that it is after five short films and his feature debut as a filmmaker, the result is more than respectable.

Because the direction of Don Jon seems very purposeful and confident. And that's absolutely necessary with a subject like this. Because too easily a film about a man addicted to internet porn could have degenerated into a raunchy farce. But even if Gordon-Levitt lets his dialogues come across rather crude here and there, he always finds the right tone to make his debut more than a flat sex comedy. Rather, he has succeeded in creating an extremely amusing, but especially in the second half also surprisingly profound portrait of a young man who, caught in a cycle of modern macho culture, overstimulation by modern media and exaggerated egomania, seems to have lost any capacity for real feelings.

While Jon seems very superficial and one-dimensional at the beginning, Gordon-Levitt manages with his pointed acting to give this character an unexpected depth and above all an extremely high sympathy value in the course of the story. He is supported by some great co-stars. Scarlett Johansson is just great as the manipulative chick. The way she reduces Jon, who is actually so self-confident, to a will-less puppy is just wonderfully played. Julianne Moore, as a lonely fellow student with a sad past, is the absolute opposite of the lascivious Barbara. She doesn't just seem like a foreign body in Jon's life at the beginning. The character also doesn't quite want to fit into the story at first, until it becomes clear that this is exactly what makes her a key figure in Jon's life and in the whole film.

Don Jon actually has everything that good cinema entertainment needs. It's funny and clever, it's convincing with engaging camerawork and fast-paced editing, it's great acting, and it just makes you feel good. Sure, the film isn't perfect, but for a directorial debut, it's pretty darn close. Absolutely worth watching for lovers of slightly more sophisticated American independent comedies!