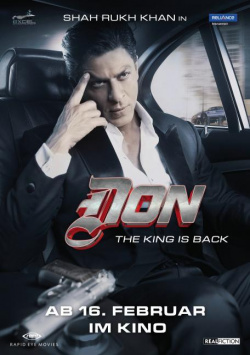 Don - The King is back

1978 the Indian gangster film "Don" became a complete success in its homeland, with the leading actor Amitabh Bachchan could finally consolidate his status as a superstar. Almost thirty years later, newcomer Farhan Akhtar dared to remake the cult film, for which he was able to win Shah Rukh Khan as the leading actor. "Don - The game begins" was a huge success not only in India in 2006, so that a continuation was quickly decided thing. Especially the German fans of Shah Rukh Khan could be happy, as the star announced personally that a large part of the film would be shot in Berlin.

In autumn 2010 the capital city was then firmly in the hands of drug boss Don for 43 shooting days, whose return can now also be seen in the cinema in Germany. "Don - The King is back" gets the gangster into real trouble at first. After the drug bosses in Europe have to fear that Don wants to extend his feelers to Europe after the Asian market, his assassination is unanimously decided. But a Don is so easy to get out of the way. After escaping an assassination attempt, he makes a seemingly absurd decision: to face Interpol in Kuala Lumpur. His offer: for important information which would lead to the seizure of all his important business partners, immunity must be granted to him. Since investigators Malik (Om Puri) and Roma (Priyanka Chopra) do not respond to the offer and simply want to see Don behind bars, the gangster has no choice but to break out and go underground in Europe. There he is planning a coup that will make his previous crimes look like peanuts...

No question who Shah Rukh Khan's first appearance as gangster Don (Was only released in Germany on DVD and Blu-Ray and HIER available), will also have great fun with this action-packed thriller. The story is staged in a fast-paced way, the action sequences are impressive and especially the fast-paced car chase through Berlin is really fun, even if it defies every form of realism. The singing and dancing interlude interspersed at the beginning, which is obligatory for Bollywood films, takes some getting used to. It's also very noble and especially for fans of the main actor it's set in a very respectable way, but still somehow seems out of place.

You also have to make friends with Shah Rukh Kahn as the cool villain. Especially when you're not really familiar with his previous works and the Bollywood cinema as a whole, his portrayal sometimes seems rather unintentionally funny. But since the film's overall style is more oriented towards an international market, action fans who don't think much of Bollywood cinema can also have fun here. Admittedly, the whole thing is often completely exaggerated and the dialogues seem to have been taken from a manual for gangster movie clichés, but the bottom line is that "Don - The King is back" is a solidly made entertainment cinema, which despite its stately length doesn't have much to offer in terms of boring moments and with its high viewing values and fast-paced action scenes really makes you feel good. Therefore: not only, but especially for all fans of Shah Rukh Kahn absolutely worth seeing!

Cinema trailer for the movie "Don - The King is back (Indien/Deutschland 2011)"
Loading the player ...