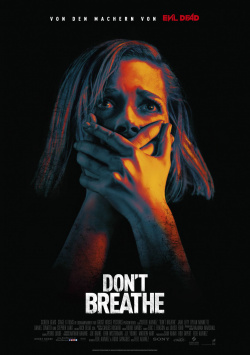 It sounds like the perfect score: In a house in an otherwise completely deserted neighborhood of New Orleans, lives an elderly man (Stephen Lang) who lost his daughter in an accident years ago. The heavily wealthy family of the woman who caused the accident supposedly paid him a handsome settlement, which is now somewhere in this house. Quickly get out, get the money and get out again - should actually be a piece of cake for three friends. After all, they have the alarm code. And their victim is blind. What could go wrong? Quite a lot, as it soon turns out.

After the success of his remake of the cult horror classic Evil Dead, director Fede Alvarez now presents another shocker with Don`t Breathe, which, however, could not have been more different. Instead of demons, splatter and gallons of film blood, Alvarez relies in his quasi-chamber play on little blood, but on unexpected twists and literally breathless tension. From the moment the three young burglars have to sneak through the blind man's house as silently as possible, the tension screw is tightened more and more. The great camerawork, the atmospheric set design but also the sound, which is reduced to an absolute minimum in some scenes, make sure that the viewer is literally pressed into the cinema seat with tension.

And when you think you have realized where the story is leading you, Alvarez delivers a twist that not only turns the events in a completely new direction. Also the borders between good and evil, which were drawn very clearly until then, get completely blurred. This makes the film not only even more exciting, but also gets an unexpected surprise moment, which should not remain the last.

More should not be revealed at this point. Because even though the thriller will make the nerves of its viewers almost shatter because of its staging alone, even if the story with all its twists and turns is known, the film then achieves the greatest intensity when as little as possible is known in advance. Of course, Don`t Breathe also has its weaknesses. Some dialogues in the opening sequence are too cliché and the very last twist is a bit too conventional, clearly aiming at a possible sequel. But that's all complaining on a high level in this case. Because the bottom line is that Don`t Breathe offers more thrills, suspense and surprises than most horror thrillers of recent years combined. So if you are not too squeamish and appreciate gripping genre fare, you should not miss this film. Just don't forget to breathe! Absolutely worth seeing!