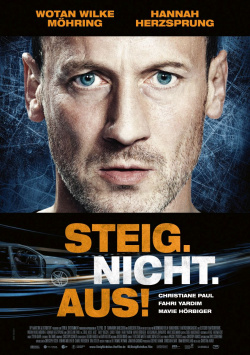 Actually, Berlin building contractor Karl Brendt (Wotan Wilke Möhring) just wanted to take his children Josefine (Emily Kusche) and Marius (Carlo Thoma) to school before returning to his work. But then he receives a phone call that will change his life forever: An unknown person threatens that a bomb hidden under the seats will blow up Karl and his children if he does not comply with the caller's demands or try to get out of the car. Under constant surveillance, the desperate family man must try to raise an enormous sum of money. In the process, he himself becomes the target of the police, as Karl's wife Simone (Christiane Paul) believes he has kidnapped the children, as their marriage is in ruins. With the police breathing down his neck, the bomb in his car and a merciless blackmailer on the phone, Karl is left with few options to save his life and that of his children just yet.

With Antibodies, lead actor Wotan Wilke Möhring and director Christian Alvart showed some 13 years ago what effective German suspense cinema can look like. Now they're trying it again with Steig. Don't. Out! again. The story is based on the 2015 Spanish thriller Anrufer unbekannt, with Alvart keeping the basic premise and only changing the motive of the unknown blackmailer a bit, as the emotional component of the story, which worked very well in Spain, would have been much less comprehensible in this country. An exciting story, a good cast and a director who can direct decent action not only since his work on the Tatort episodes with Til Schweiger - what could go wrong?

Unfortunately, quite a lot. While the thriller can be visually convincing and can also set a good pace for long stretches, Alvart does not manage to build a real emotional connection between his characters and the audience at any moment. This is primarily due to a very one-dimensional character drawing. Daughter Josefine, for instance, is the absolute standard movie teen girl, with constant I'm-in-puberty-and-all-adults-are-shit facial expressions. As a viewer, you get annoyed by that pretty quickly. But even the otherwise very reliable Wotan Wilke Möhring can hardly convey the emotional rollercoaster his character is sent on credibly because of the script.

In the second half of the film in particular, the - especially on the part of the police - almost stupid behaviors pile up, which lead to a finale that unfortunately has no real surprises in store. It's always obvious that Alvart has a good eye for great action cinema and that he actually knows his craft very well. But here he just gets lost in too many clichés, logic holes and predictability, so that the actually decent entertainment value suffers again and again. Even if it's hard for me to criticize a man who has secured the rights to my childhood idol Captain Future and who has already delivered some really worth seeing movies, I can only say as a conclusion: Better watch the Spanish original and hope that the next Alvart will be better again. Only with clear deductions worth seeing!