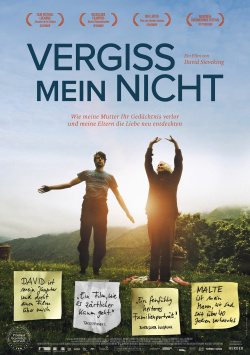 Filmmaker David Sieveking (David Wants to Fly) returns to his home in Bad Homburg. However, it's not one of those typical family visits he's done so many times before. David's father Malte, a retired university professor, urgently needs a vacation and wants to relax for a few weeks in Switzerland and regain his strength. And during this time David is supposed to take care of his mother Gretel. Gretel, a former language teacher who was politically very active until her old age, has been suffering from Alzheimer's dementia for several years. Her memory gaps are getting bigger and bigger. Light moments still exist, but they are now the exception rather than the rule. It is a steady physical and mental decline, a slow farewell to his mother, which David Sieveking has captured in a very warm, moving and yet, despite its sadness, very life-affirming, optimistic film.

Don't Forget My is a very sensitive documentary. Although Sieveking doesn't turn off the camera even in moments of great intimacy, his film never feels voyeuristic. This may also be due to the fact that in the course of the film the actual illness recedes more and more into the background. Because the more Gretel forgets about her life, the more David wants to learn about his mother and her very eventful life. And so he goes on a journey into the past, reads her diaries, meets old companions and visits places of her past with Gretel herself. In this way, the viewer learns that David's parents had an open marriage, that there were other partners at her and at Malte's side, or that she did not only make friends through her political activities. Through this, he gets to know a personality that is disappearing more and more.

But the woman who takes her place David comes to know and love all over again during the intense time they spend together. Gretel's longing for love and security, the fact that she can remember her father, whom she lost when she was still a young girl, and the fact that Malte, with whom she never actually had a classic love-marriage, has become such an important caregiver, suggest that her actual personality may be fading, but her emotions remain. This gives the film a lot of really nice moments that are not only moving, but can be quite humorous as well.

And that's what Sieveking has to be given credit for. Although he actually documents something very, very sad and lets the audience share in it, Forget My Not just didn't become a depressing consternation film. Rather, it is an enchanting love letter to his mother, an ode to life and love. Of course, this sometimes moves to tears, but at other moments it is also very amusing or simply beautiful. And although there is no happy ending per se for Gretel and her loved ones, the viewer is still released from the cinema with a very positive feeling at the end. That's a real feat that can't be credited highly enough to David Sieveking. So if you want to deal with the topics of old age, dementia and death in a very special and, despite all the tragedy, also light and life-affirming way, you should definitely not miss this documentary. Absolutely worth seeing

Cinema trailer for the movie "Forget My Not (Deutschland 2012)"
Loading the player ...