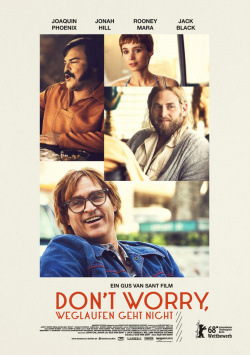 Don't Worry, You Can't Run Away

John Callahan (Joaquin Phoenix) loves to just live in the day. He counters the heavy aspects of his daily life with a cynical sense of humor and a little too much alcohol. This preference has fatal consequences after an excessive drinking spree: After a serious car accident, John ends up in the hospital, where he learns that he will never walk again. Although this message threatens to plunge him into a deep hole, he allows himself to be persuaded to take part in rehab therapy with Alcoholics Anonymous. On the hard road out of addiction, John discovers his talent for biting cartoons - a talent that will take his life in a whole new direction.

In his latest film, Don't Worry, You Can't Run Away, Gus Van Sant adapts the autobiography of legendary cartoonist John Callahan. Twenty years ago, Van Sant already wanted to film the story together with Robin Williams, but then it never came to pass. After long discussions with Callahan before his death in 2010, the filmmaker was able to flesh out the script in such a way that it would do justice to the unusual life story of the controversial artist. After another long years of planning, the project finally came to fruition with Joaquin Phoenix in the lead role.

He plays the funniest man on four wheels, as Robin Williams once called John Callahan, really great. His acting fits in perfectly with Van Sant's production, which manages a successful balancing act between comedy and drama, and thankfully never lays it on too thick, even during the more emotional scenes. The fine ensemble of actors, from which Jonah Hill in a very unusual role, but also Jack Black, particularly stand out, are further supported by scenes in which Callahan's cartoons are brought to life.

So Don't Worry, running away doesn't work is a dramaturgically, acting and visually accomplished film. A little too long perhaps, but overall a stirring insight into the life of an artist who has not been without controversy, but in any case with his cartoons for the scene trend-setting. For this there is clearly a: Worth seeing!