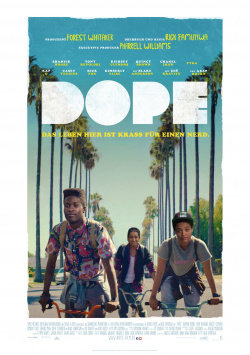 Malcolm (Shameik Moore) is a very special nerd. He loves 90's hip hop, and it shows in his clothing style and hairstyle. He also plays in a punk rock band with his best friends Diggy (Kiersey Clemons) and Jib (Tony Revolory). Malcolm's big dream is to escape the dreary L.A. suburb where he lives with his mother Lisa (Kimberley Elise) and attend Harvard. As a result, he also avoids any trouble - until he meets the attractive Nakia (Zo&euml; Kravitz). Hoping to get closer to her and maybe even win her heart, he gets talked into going to drug dealer Dom's (A$AP Rocky) party. Suddenly, events take a turn for the worse: the police crash the party, Dom goes to jail and Malcolm, who managed to escape in time, finds a lot of drugs in his backpack. Of course, the model student wants to get rid of them as soon as possible in order not to endanger his future. But when he receives instructions from Dom in prison to deliver the drugs, it is only the beginning of a turbulent adventure that threatens to drag Malcolm and his friends deeper and deeper into the abyss.

With Dope, filmmaker Rick Famuyiwa returns to the place of his childhood. Like his protagonist, he grew up in Inglewood, an L.A. suburb. Here, he wanted to tell a story that shows how much you are shaped and molded by the place you live when you are young. At the same time, it's also meant to show that you are ultimately in control of your own destiny and can fight back against all external circumstances - even when the world seems to be conspiring against you. Now that sounds like the perfect stuff for a heavy drama. But that's exactly what Famuyiwa didn't want to stage. He had rather a kind of loose business for the social media generation in mind.

And so he has indeed built some dramatic aspects into the story about the unusual nerd Malcolm and his friends. But first and foremost, this 2015 Sundance Film Festival darling is a refreshing independent comedy that manages to take a tongue-in-cheek look at the very normal problems young people face in L.A.'s troubled neighborhoods without trivializing or ridiculing them. And so it is really amusing to see how Malcolm, Diggy and Jib use the very skills they are always teased for at school to take on powerful drug dealers.

A coherent soundtrack, atmospheric images and good actors support the successful and in places pleasantly original script. Thus, Dope becomes a very watchable comedy that skillfully plays with clichés and shows that you can also draw attention to serious issues in a light, amusing way, without plunging the audience into frustrating consternation. A little insider tip that absolutely deserves a clear worth seeing