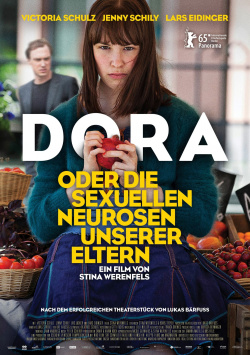 Dora or the sexual neuroses of our parents

For a long time Kristin (Jenny Schily) and Felix (Urs Jucker) have kept their mentally impaired daughter Dora (Victoria Schulz) quiet with medication. Now the treatment has been discontinued and the 18-year-old girl is not only finding her way back into life, but discovering her own sexuality in the process. It's not long before she finds herself attracted to the charismatic Peter (Lars Eidinger) in every way and engages in spontaneous sex with him. When his parents find out, they are shocked. They aren't sure if Dora is ready to take on this responsibility over her own body. Peter's arrogant demeanor doesn't help ease either of their worries. But despite their best efforts to prevent it, Dora continues to meet with her lover. And then what Kristin in particular was terrified of happens: her daughter gets pregnant...

With Dora oder die sexuellen Neurosen unserer Eltern, the film adaptation of the successful play by Lukas Bärfuss, filmmaker Stina Werenfels dares to tackle a very difficult subject. Her film asks uncomfortable questions and forces the viewer to deal with them, even if at some moments you would rather look away. In doing so, some moments, like the first sex between Dora and Peter, are kept as ambivalent as the characters themselves. This is especially true for Peter, who at first seems to be an uncaring pig who is just taking advantage of Dora. But the longer you as a viewer are forced to deal with this character, the more you recognize traits in him that suggest he is serious after all and has real feelings for the young woman.

The fact that not everything is clearly served on a platter here and the viewer is encouraged to reflect on his own, makes the film extremely interesting. This positive impression is supported by the excellent acting of Victoria Schulz and a no less great Lars Eidinger. Also the fact that Stina Werenfels uses pleasantly biting humor again and again and thus consciously refrains from a politically correct staging, must be credited to the film in any case.

Despite this, it is precisely the non-conformity that makes the work very difficult and sometimes somewhat unwieldy fare. As a viewer, it's hard to find access to the characters and often can't really understand their actions. Still, at the beginning the film works quite well, which can't really be said of the ending. In the effort to bring the message about sexual freedom, self-determination and the mother-daughter conflict to a coherent conclusion, the production gets lost in unnecessarily confused sequences, which permanently disturb the positive overall impression.

Dora or the sexual neuroses of our parents is an uncomfortable, unusual and unconventional film, which despite many positive aspects, however, offers its viewers too little reference surface. And since by the last act you're really just left wondering what the point of it all is, or whether these scenes are really necessary to the story, it's hard to draw an all-round positive conclusion. But one thing is clear: if you appreciate challenging art house films from Germany, you should risk a look here just because of the good actors. And for this audience then also applies: With small deductions worth seeing!

Cinema trailer for the movie "Dora or the sexual neuroses of our parents (Schweiz/Deutschland 2014)"
Loading the player ...