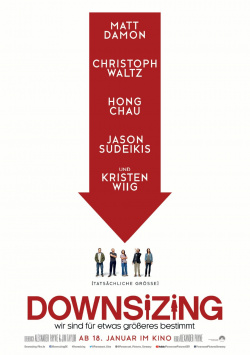 Our planet is groaning under overpopulation. As resources draw to a close, Norwegian scientists come up with a possible way out: they develop a way to shrink humans. The mini-versions would use less space and less food, produce less waste, and take up less valuable farmland for housing. Sounds ideal, right? At least it does to Paul Safranek (Matt Damon) and his wife Audrey (Kristen Wiig), who want to trade their average life in Omaha for a future in a mini-community. But when Paul awakens after the shrinking process, he soon discovers that even in a mini-utopia, there can be some pretty big problems.

Downsizing is a fascinating, but also extremely frustrating film. Alexander Payne does a great job of establishing an idea at the beginning that lays the perfect groundwork for an excellent social satire. And that's exactly where the film seems to be headed. A bit of absurdity, a lot of partly very cryptic humor and fascinating ideas make the first minutes of Downsizing quite a pleasure. But soon the first problems become apparent. The many great approaches, which make great desire to learn more about the small town to which Paul and Audrey want to move, are only very briefly touched upon.

Because no sooner have they arrived in their new home than Paul has to learn that even in the mini-world there are class differences and normal everyday problems. And already the film takes its first unexpected turn. This is actually a positive thing, as it would fit the tone of the beginning of the film. But what is initially sold as a comedy suddenly turns into a rather dark social drama with a slightly satirical twist - only to take another turn into a dystopian doomsday drama after some time. The result is a jumbled collection of many good ideas that have been somewhat clumsily pieced together.

It seems like Payne squeezed ideas for several movies into one story here at any cost. This has genuinely great moments and great actors like Hong Chau, who easily steals the show from both Matt Damon and two-time Oscar winner Christoph Waltz. But a homogeneous whole just doesn't want to happen. It's a shame that Payne couldn't decide on a direction. A little less would have been more dramaturgically. But as it is, the whole thing is simply an abstruse jumble that is completely mis-sold in the trailers.

So Downsizing as a social satire is only worth seeing to a limited extent, but as an example of a film production gone off the rails it is definitely interesting to watch. And because of the then quite numerous successful aspects, despite the disappointing overall impression, there is just a: Worth seeing!

Cinema trailer for the movie "Downsizing (USA 2017)"
Loading the player ...