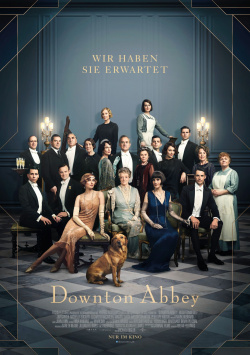 1927: Excitement at Downton Abbey. None other than the royal couple have announced their visit. For the Crawleys, this event is not all good news. Because such a royal visit brings a lot of hustle and bustle and preparations with it. Especially as there is bad blood between Lady Violet (Maggie Smith) and Maud Bagshaw (Imelda Staunton ), a close confidante of the Queen. Trouble is inevitable. There's also trouble with the servants. First the new head butler Barrow (Robert James-Collier) has to hand over his post to his predecessor Carson (Jim Carter), who has actually retired. And then comes word that the royal staff will be running all the operations. But as the Downton Abbey servants are not about to be sidelined so easily, the big event soon threatens to turn into a disaster.

With Downton Abbey, acclaimed screenwriter Julian Fellowes (Gosford Park, Young Victoria) has created one of the most successful and also best quality British TV series of recent years. Even though the stories of the aristocratic Crawley family and their servants at the Downton Abbey country estate were brought to a very nice and well-rounded end with the sixth season in 2016, the desire to return to the Crawleys in the form of a feature film quickly arose not only from fans but also from everyone involved. Rumors like this come up all the time with many beloved TV series. But rarely do they actually become reality. And even when it does, the result is often rather disappointing.

Fans of Downton Abbey can rest easy, though: The theatrical version offers exactly what they loved about the series. Granted, from a dramaturgical standpoint, this new story wasn't really needed. There are some new developments for individual characters, but they don't come close to the inherently perfect conclusion that the Christmas special of season six offered. Still, what makes the film so worth watching for fans is the fact that it just feels good. Right from the start, which has the audience in a wonderful sequence for a bit before the wonderful title theme gives you blissful goosebumps, it settles over the audience like a warm blanket. It's just getting back to Downton Abbey.

There is, however, one small flaw with the film: it tried to cram too much into its two-hour running time to really make every fan happy. So the whole thing seems a bit overloaded and rushed in places, which doesn't fit the style of the series at all. But in the end, the result is more than satisfying. There's a lot to laugh about - especially Lady Violet's once again wonderfully dry remarks -, there's a bit of romance, some drama and at the end even a few tears are allowed to roll. On top of that, there are some beautiful shots that look really good, especially on the big screen. Yes, this is how the cinema version of a TV series must look like!

Downton Abbey is a nice gift to all fans of the TV series. Dramaturgically a bit overloaded, but otherwise just beautiful, extremely entertaining and also moving. If now really should be finally end, this is the second perfect finale of a great TV series and therefore also: Absolutely worth seeing!