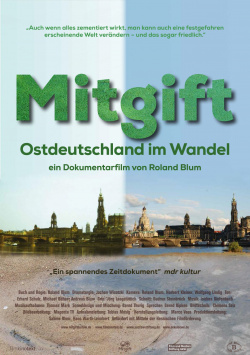 When the Berlin Wall fell, it was a very special moment for people all over Germany and for politics in Europe - a moment that filmmaker Roland Blum wanted to capture in documentary form. After all, after the opening of the borders and shortly before reunification, the former GDR was subject to drastic and rapid change, which Blum wanted to capture with his camera. In the process, he found a country on the verge of ecological collapse. Shocked by the desolate treatment of the environment, Blum focused primarily on this aspect of life in the new German states, which he then visited again in 2001 and 2013. The footage he captured during his three trips through the former GDR actually documents a transformation that in many places went well for nature but to the detriment of the inhabitants.

Blum's film Mitgift shows how the end of major environmental offenders such as lignite mines or film manufacturers allowed nature to (apparently) flourish again, but at the same time plunged the regions into high unemployment and a lack of prospects for the residents. The example of the region around Bitterfeld illustrates in a sometimes frightening way the levels on which the transformation of a country can take place. When Blum visited the area for the first time in 1990, environmental protection was still in its infancy. Plans were in place to attract new investors and residents to the region. At the same time, however, so much waste and pollutants were being dumped haphazardly into the waters that even in 2000 workers had to wear protective suits during remediation work and photographs could only be taken from a safe distance with a telephoto lens. Today, this very area is a nature reserve and the flooded open-cast mines around Bitterfeld are the largest artificial lake landscape in Germany.

In Wolfen, on the other hand, the changes have caused unemployment to rise and many people to move away from the region. In view of the circumstances under which people have had to work in the ailing film factory, the question arises precisely whether this superficially negative development should not also be seen in a positive light. It is a very complex subject that Blum deals with in his long-term documentary. The fact that change, regardless of whether one personally perceives it as positive or negative, is possible even when one may no longer believe in it, becomes impressively clear, especially with the footage around Bitterfeld.

No question, Mitgift is a very interesting, in parts also entertaining and thoroughly important film. But whether the documentary, made in collaboration with HR and SWR, necessarily belongs in the cinema is another matter. Even though there are some very nice shots in the material shot in 2013, the film neither gains in quality when you see it on the big screen, nor does its message lose in persuasiveness when you only watch it on the TV screen. The documentary is definitely worth seeing, though in the end it's more of a TV product than a feature film!

Cinema trailer for the movie "Dowry (Deutschland 2014)"
Loading the player ...