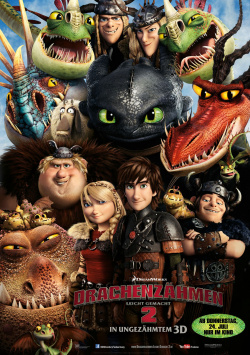 Since the young Viking Hicks (spoken by Daniel Axt) made it clear to his father, the tribal chief Haudrauf (Dominic Raacke), and the other inhabitants of Berk that dragons are not their enemies, humans and dragons live peacefully together in the small Viking village. The everyday life of the Vikings is now dominated by idyllic harmony and lots of fun. So Berk is actually the perfect place to live. But that's not enough for Hicks. He wants to know what else the outside world has to offer. And therefore he flies again and again with his kite friend Ohnezahn through the air to explore and map the area around Berk. When he meets the dragon hunter Eret and his men one day, Hicks realizes that peace is in great danger for Berk and all dragons living there. For Eret is to catch all dragons for the unscrupulous Drago, so that he can then build himself a mighty dragon army and thus become invincible. When Haudrauf doesn't even want to go into the details of his son's suggestion to seek a mediation with Drago, the courageous Hicks sets off on his own to become the sinister villain. He meets a mysterious dragon hunter who will change everything for the young Viking…

Four years ago the story about the shy Viking boy Hicks and the lovely dragon Ohnezahn enchanted millions of people all over the world.With a worldwide income of almost 500 million dollars, this amusing and moving adventure was one of the greatest animation hits of 2010. After Hicks and his friends had the chance to experience new adventures in the series "Dragons - The Riders of Berk" and "Dragons - The Guardians of Berk", the second big cinema film is finally following. The first minutes of "Dragon taming made easy 2" are a bit disappointing though. This is not due to the animations, which are absolutely first-class, nor to the humour, which is not particularly subtle, but rather wonderfully weird.

Much more it is the fact that the very fast-paced staged opening sequence lacks the charm of its predecessor and makes use of conventional means of contemporary animation. There is the obligatory 3D roller coaster ride, accompanied by many "Ahhhhas" and "Juhuuus" and then as a soundtrack also a hot pop song is used. If one has seen a few similar animated films in the last two years, it unfortunately seems to be much too familiar. But just when one is inclined to believe that even "Dragon taming made easy 2" would have jumped on the unavoidable "faster, louder, bigger" train, this impression changes noticeably.

The sequel remains more spectacular and also more action-packed than the first part. But after the hectic opening sequence there is much more focus on the story, which sometimes has an amazing depth and in one scene even made some of the children present at the press presentation cry. The characters are very lovingly drawn and quickly grow back to your heart - and that's exactly what makes this scene so extremely emotional. But it's not just the heartbreaking plot twist that makes "Dragon Taming Made Easy 2" a very successful sequel. The characters and their relationships have been consistently developed and you never get the feeling of just seeing a mild infusion of the first film, but a real continuation of the story. The fact that the excellent work of the animation specialists makes it extremely easy to immerse oneself in the world of hicks and co. on a visual level intensifies this positive impression.

Even if the message of the film is not conveyed subtly, you can feel that the makers don't consider their audience to be completely underexposed. So there is not only action and humor, but also a really nice story and a pleasant emotional depth. This makes "Dragon tames made easy 2" perfect cinema entertainment, which children can find extremely cool just because of the many dragons, but which also entertains adult companions and animation fans who are young at heart. Who already liked the first part will love this great sequel. And for that there is a very clear one: Absolutely worth seeing!

Cinema trailer for the movie "Dragon taming made easy 2 (USA 2014)"
Loading the player ...