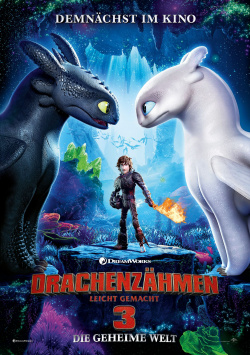 Young Hiccup (voiced by Daniel Axt) has become the respected leader of the Vikings of Berk. He has succeeded in creating a place here where humans and dragons live together in peaceful unity. With the brave Astrid (voiced by Emilia Schüle) and his best dragon friend Ohnezahn by his side, Hiccup looks forward to a happy future. But then a day-shadow female suddenly appears on Berk, who not only turns the head of the night-shadow dragon Ohnezahn, but also shows him the way to the secret world - the place where dragons are supposed to live. Hiccup now questions his dragon utopia, but he has little time to do so. For the ruthless dragon hunter Grimmel has set his sights on the secret world to wipe out all dragons once and for all. And Hiccup and his friends must stop that at all costs.

Eight years ago now, the story of the shy Viking boy Hiccup and the lovable dragon Toothless enchanted audiences in their millions around the world. With a worldwide box-office takings of almost 500 million dollars, the amusing and moving adventure was one of the biggest animated hits of 2010. After Hiccup and his friends were allowed to experience new adventures in the series Dragons - The Horsemen of Berk and Dragons - The Guardians of Berk, the second major motion picture finally followed in 2014. After this was also a success, Hiccup, Toothless and the other dragons now get to experience their presumably last adventure together in Dragon Taming Made Easy 3.

Director and screenwriter Dean DeBlois, who is responsible for all three parts, has also created a good mix of humor, adventure and big emotions in this successful finale, which manages to spice up the familiar elements once again with new ideas. Due to the fact that the characters have steadily evolved, the whole thing doesn't feel like a lukewarm rehash. However, it also becomes clear that the world of dragons can't be stretched much further without the whole thing inevitably becoming repetitive. So the timing for an ending to the story of Hiccup and Toothless is really perfectly timed.

This is also noticeable by the fact that for the first time in the series, there is no real surprise here. It's very quickly clear where the journey is going and how this story will end. However, the entertainment value is still very high. Despite a certain predictability, the audience is rooting for the dragons and their human friends and is quite gripped especially regarding the direction in which the friendship between Hiccup and the Nightshade Dragon develops. Dragon Taming Made Easy 3 may not be a surprising film, but it is an entertaining, thrilling and funny animated film with a fascinating visual language and endearing characters. For that, it definitely gets a: Absolutely worth seeing!

Cinema trailer for the movie "Dragon Taming Made Easy 3: The Secret World (USA 2018)"
Loading the player ...