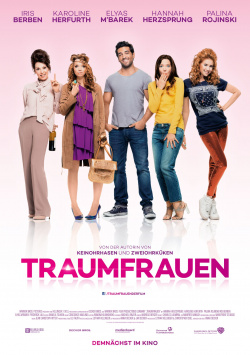 As the doctors sang so aptly: Men are pigs! A statement that Caf&eacute;-owner Leni (Hannah Herzsprung) unfortunately has to agree with wholeheartedly after she learns that she has been cheated on by her future husband for months. The dream of marriage, children and a shared apartment is of course shattered and Leni has to move in with her sister Hannah (Karoline Herfurth) and her best friend Vivi (Palina Rojinski). But things don't look much better on the male front for the two of them either. While Hannah always falls for the wrong guy due to her own inferiority complexes, Vivi at least believes that she knows the perfect cure for lovesickness: having as many one-night stands as possible. That's nothing to Margaux (Iris Berben), the sisters' mother, who was left by her husband for a younger woman after 35 years of marriage. But as desperate as these dream girls may be, they haven't given up hope of finding the love of their lives. But the road ahead is lined with missteps, embarrassments, unexpected feelings and disappointments.

Dream Wives is the directorial debut of Anika Decker, who rose to fame as the writer of the hit movie Keinohrhasen. Her debut as a filmmaker is a nice female comedy, which seems to consist only of clichés, but serves them very pointedly and sympathetically. However, it's clear from the film that Decker still lacks a bit of experience when it comes to directing and that her real strength lies in writing dialogue. Indeed, these are often extremely funny and make for numerous successful moments. However, Decker has a hard time tying them together into a coherent whole. In many moments the action seems too episodic to show a clear narrative structure. As a result, much of the charm brought by the actresses and some of the amusing exchanges is also lost.

The mix of rather clever dialogue and rather simple-minded, not very subtle gags also feels a little unbalanced in places. It's thanks to the good-humoured ensemble that the comedy nevertheless works well and should absolutely satisfy its target audience. Sure, Hannah Herzsprung, Karoline Herfurth or Iris Berben have certainly delivered much better and more demanding performances in their acting careers. But they all manage perfectly to fill their rather one-dimensional characters with enough life and charm, so that one simply enjoys watching them and gladly accepts weaker gags.

Home star of the film, however, is Palina Rojinski, who not only undergoes the most interesting transformation in the course of the film, but also gets to serve the best sayings in a delightfully dry way. The men play only a supporting role alongside the strong actresses. Nevertheless, it is very pleasant that Elyas M`Barek and Frederick Lau don't play the same characters they have already embodied in too many films, but are allowed to show themselves from a slightly different side. Surely, the script doesn't present them with any great acting challenges. Still, it's just nice to see the two of them just being lovable likeable characters.

Dream Wives may not be the all-time big hit. But if you just want to see light romantic comedies with convincing actors, some sparkling dialogue, a nice soundtrack and atmospheric shots of the capital, you can't really go wrong here. Therefore: primarily a film for women, but in general all fans of German comedy fare in the style of Mann tut was Mann kann or just Keinohrhasen can go on a date with these dream girls. Worth seeing