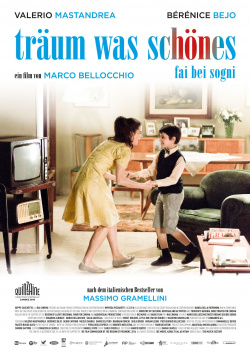 1999: Massimo (Valerio Mastandrea) was just a nine-year-old boy (Nicol&ograve; Cabras) when he lost his mother (Barbara Ronchi). His father (Guido Caprino) was never able to fill the void left by his mother's death. What actually happened on that fateful night thirty years ago, Massimo does not know. But it seems to have triggered a trauma in him that has left him incapable of any kind of relationship to this day. But then the journalist meets the enchanting Elisa (B&egrave;r&egrave;nice Bejo), who awakens feelings in him that he has never felt before. But he quickly realizes that he must walk a painful path to come to terms with the mysteries of his childhood if his love for Elisa is to stand a chance.

Dream Something Beautiful is the film adaptation of Massimo Gramellini's novel of the same name. It's a story about repression and coming to terms with the past, These motifs have been executed with sensitive restraint and emotional complexity by Italian master director Marco Bellocchio. This comes across as extremely poignant in some scenes, but somewhat distant and unwieldy at other moments. When Massimo's journalistic career is traced, there is a certain charm to it. But there is also the impression that a few minutes less here would not necessarily have harmed the film, especially since it is not always really obvious what certain scenes contribute to the actual story.

However, especially the scenes with little Massimo, played magnificently by Nicol&ograve; Cabras, are of such emotional strength that they quickly make some lengths forgotten. Still, in the end, you're not really left with a well-rounded overall picture. Rather, the whole thing comes across as an episodic puzzle that at times moves and entertains well, and at other moments feels a bit plodding and even inconsequential. For those who appreciate European arthouse cinema, this is a beautifully filmed drama that tells a very intimate and personal story embedded in some important historical events. Massimo only experiences these on the sidelines before being in the thick of it as a journalist. It's interesting and gripping, but at over two hours, it's also a little too long. And that's why the bottom line is that it's only worth seeing with a few minor restrictions!

Cinema trailer for the movie "Dream Something Beautiful (Italien 2016)"
Loading the player ...