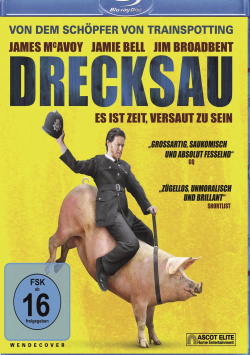 Film: After the huge success of Danny Boyle's adaptation of Trainspotting, other filmmakers have tried their hand at works by cult Scottish author Irvine Welsh. But none of these films came close to achieving the cult status that Trainspotting still holds 17 years later. It is only now that Jon S. Baird has managed to deliver a similarly successful Welsh adaptation with his film version of the novel Drecksau, which has become nasty, irreverent, cynical, dirty and damn funny.

The titular Drecksau is Detective Sergeant Bruce Robertson (great: James McAvoy), who is convinced he is the best cop Glasgow has to offer. He's boozy, corrupt, addicted to cocaine, scheming and depressed - but despite this, he's the only one on his team who actually deserves the promotion he's about to get. Certain that only professional advancement will bring him back his wife, he never misses an opportunity to convince his superiors of his competitors' weaknesses and play them off against each other. But as Bruce is always balancing on the brink of madness, he soon loses track of the intrigues he has spun himself. He gets tangled in a web of lies, sex, deceit and drugs - but of course a real scumbag like him doesn't give in easily...

There are films that are hard to put into words. These are usually the kind of films that you experience rather than simply watch. And Drecksau is also one such experience, though not all viewers will have the same positive effect on it. There are probably many who will not be able to make friends with this unrestrainedly immoral, politically incorrect, bitterly evil and extremely cynical work and who will leave the cinema rather disgusted or shocked - perhaps even prematurely. You should already have a soft spot for black humor of the particularly nasty kind to be able to break through the morally repulsive surface of the film and then recognize the true genius of the work there. For as with Bruce Robertson himself, what you see directly is only a facade through which reality is obscured.

But first and foremost, Drecksau is an absolutely fascinating James McAvoy show. How the actor once particularly subscribed to nice, positive roles (Abbitte, A Russian Summer) brings an all-around bad, corrupt, immoral character to life is really quite great cinema. Although actually everything Robertson does - whether it's humiliation, cheating, drug use, sexual debauchery, or pissing off little kids - is bad, it's incredibly fun to watch him really stab everyone around him in the back. At the beginning, this still conceals the really dramatic downward spiral the cop finds himself in. But at some point, there's no hiding the fact that Robertson is headed for complete self-destruction - and that has an even more intense effect on the viewer.

Cutting, the music choices, camera angles, and of course the acting of all the other great actors like Jamie Bell, a truly wonderful Eddie Marsan, and the delightfully cranky Jim Broadbent make Drecksau a trip you have to see to believe that a movie like this really exists. It's really no wonder that the flick has found a distributor in almost every major market so far (as of October 2013) - but not in America. This Irvine Welsh adaptation is certainly not a pretty movie, not light stuff, but a dirty, uncomfortable comedy that is so incredibly amusing simply because it doesn't care about political correctness at any moment - and culminates in one of the best final shots in recent memory. For anyone who likes it nasty, cynical and dirty, it's now - as the movie poster so beautifully puts it - time to be filthy: Absolutely Worth Seeing!

Image + Sound: The Blu-ray's image features slightly exaggerated contrasts and an occasionally distinctly artificial color scheme. However, both are part of the film's deliberately over-stylized look, and as such can be considered very well executed. Image sharpness and the matching of black levels can also convince. The audio, which is available as a DTS-HD 5.1 MA mix, pleases with powerfully tuned dialogue and some gaudy sound effects that, along with the great soundtrack, keep things moving in the surrounds. Good!

Extras: The bonus offerings are primarily limited to typical promo material. In addition to a short German-language promotional featurette (approx. 3:35 min.), there are a few interviews with James McAvoy (approx. 14:36 min.), Jamie Bell (approx. 2:20 min.), Imogen Poots (approx. 1:05 min.) as well as Jon S. Baird (approx. 11:24 min.). The conversation with director Baird clearly provides the most interesting information about the making of the film. Finally, there is some uncommented B-Roll footage (approx. 5:41 min.), the trailer for the film and further program tips. In addition, James McAvoy also welcomes the German viewers in a small intro to the film.

Conclusion: Drecksau is a dirty, uncomfortable comedy that lives from its excellent actors and the abandonment of the usual political correctness. A film where the name really says it all and which presents itself on the Blu-ray in good picture - and sound quality. Even if the extras offered are rather superficial, applies to this disc a very clear: Absolutely recommendable!