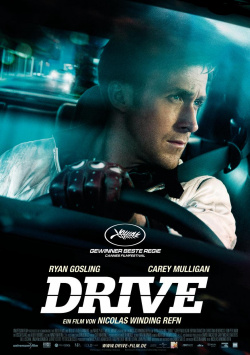 Driver (Ryan Gosling) is not only professionally behind the wheel. Because while he drives as a stuntman for Hollywood movies by day, he makes big money as a getaway driver by night. His talent and his strict adherence to the rules have always ensured that Driver has been able to complete his assignments undetected by the police. But then his new neighbor Irene (Carey Mulligan) enters the life of the loner. He quickly becomes fascinated by the young mother and makes a fatal mistake: he allows himself to be persuaded by her husband Standard (Oscar Isaac), who has just been released from prison, to take on a supposedly surefire job. The plan goes awry, of course, and now Driver and Irene are caught in the crosshairs of one of the city's most dangerous gangsters. Even the best maneuvers can't help Driver now. Simply driving away is not the answer here. There is only one possible tactic: a direct assault on the enemy.

Drive is, on the surface at least, arguably the most commercial film to date from Danish director Nicolas Winding Refn, who has consistently delivered an engaging mix of violent entertainment cinema and multi-layered arthouse cinema with his Pusher films and most recently Valhalla Rising. Drive is also difficult to pigeonhole. With its super-cool visuals and '80s synth soundtrack, the film could almost be considered an homage to the earlier works of Michael Mann or Walter Hill. But Refn's production again defies the viewer's expectations. So there is a spectacular car chase right at the beginning, but all in all very quiet scenes prevail, which are carried by moments of long silence. These are then in turn interrupted by outbursts of extreme violence, which leave a lasting impression precisely because of their embedding in an environment that is in itself rather quiet.

Whether as a sometimes very tough gangster film or as an almost tender romance, Drive repeatedly makes use of common genre clichés, only to break with them again completely. The result is a film that divides opinions: a masterpiece for some, a pointless and rather boring piece of work for others. Of course, there's no arguing about the high quality of the film. Whether it's the excellent camerawork or the terrific actors, among whom an extremely cool Ryan Gosling and the wonderful Bryan Cranston (Breaking Bad) stand out, especially a great menacing Albert Brooks, all these elements are beyond any doubt. The fact that the content and its implementation can be argued about, again, also makes the appeal of this film. You can't exactly say that Drive All will appeal to those who also enjoyed Film XY. Rather, this thriller drama is an experience all its own, from which you either walk out completely enthralled or quite perplexed and, as a result, bored.

So this undercooked and very bloody journey through Los Angeles may not appeal to a particularly large mass audience. But for those viewers who can engage with Nicolas Winding Refn's very special production, they will be rewarded with great actors, cool visuals, some impressive moments and a story that is definitely very exciting in its simplicity. And exactly these viewers will be able to recognize that Drive is a little masterpiece in its own way. Absolutely worth seeing!