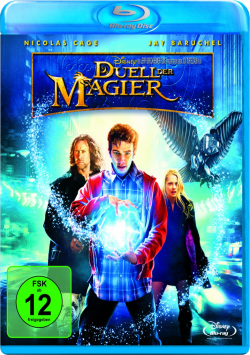 After the successful collaboration on the two "National Treasure" films, actor Nicholas Cage, director Jon Turtletaub and producer Jerry Bruckheimer have once again teamed up to offer the audience the best popcorn entertainment with great effects and an exciting story. At least partly this time again succeeded.

The movie was inspired by an episode about a sorcerer's apprentice fighting with out-of-control brooms, which Disney already presented in "Fantasia" as a cartoon version at that time. This scene can also be seen in "Duel of the Magicians", embedded in a rather thin, but nice fantasy story: Actually, Physik-Stundet Dave (Jay Baruchel) only wants one thing: not to attract attention. And maybe win the heart of his beautiful commoliton Becky (Teresa Palmer). But a life as successor of the legendary magician Merlin was not on his agenda. Too bad Merlin's former close ally Balthazar Blake (Nicolas Cage) chose him for this task. However, as little Balthazar himself may believe that Dave, the inconspicuous one, is the chosen one, he is aware that he needs the boy and the powers slumbering in him to fight his arch-enemy Maxim Horvath (Alfred Molina). For he plans to free a witch who has been trapped for centuries and who is so incredibly powerful that even Balthazar could do nothing against her - which would be tantamount to the end of the world. And so the fate of all mankind lies in the hands of a real nerd...

"Duel of Mages" has a lot of potential: the actors are well chosen, the effects are neat and the story itself is entertaining. Nicholas Cage, who recently impressed in the unfortunately lost "Kick-Ass", plays a bit listless at some moments, but overall delivers a funny performance. Jay Baruchel actually acts exactly like in his last movie "Too sharp to be true", which may seem a bit one-sided, but fits for the role of the sorcerer's apprentice against his will very well. Alfred Molina is great as always, but his sovereign portrayal of the evil magician is buried a bit too much under special effects. The other actors are rather marginal figures. But while the quite talented Teresa Palmer is nothing more than food for the eyes, the Brit Toby Kebbell ("Prince of Persia") is allowed to show his best side as Drake Stone, a kind of pop star among the magicians. No question, his much too short appearance is one of the comedic highlights of the film.

It's a pity that every approach of originality, wit and suspense is overrun by a jumble of sometimes very good, sometimes somewhat disappointing special effects. "Duell der Magier" makes it clear in its best moments that the movie would have had much more potential than just nice popcorn cinema for the eye. But unfortunately there was too little emphasis on working out the story and maybe laying a good foundation for possible sequels. But already after half of the movie the viewer gets the feeling that the whole potential is exhausted.

No question, "Duel of the Magicians" entertains well. In some places even very good. The film looks good and is supported by actors who perform well for the genre. But unfortunately the movie lacks exactly what a work with the title "Duel of the Magicians" shouldn't miss: magic! The effect spectacle doesn't seem magical at all, but much too smooth and well-constructed. So the inclined viewer is well entertained, but the desire to see more of Balthazar and his sorcerer's apprentice doesn't really come up. Therefore: Worth seeing with some concessions!