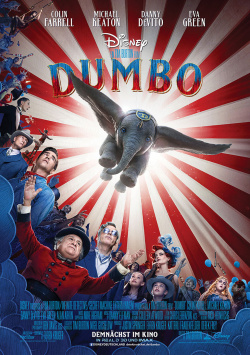 Max Medici's (Danny DeVito) circus has truly seen better days. Even the return of his former World War I star Holt Farrier (Colin Farrell) won't change that, as Holt has lost an arm and will likely never be able to perform his daredevil acts again. But the birth of a baby elephant might bring the audience back. But disillusionment soon comes: the little elephant is born with oversized ears, making him the laughing stock of the circus. But Holt's children Milly (Nico Parker) and Joe (Finley Hobbins), who are supposed to take care of little Dumbo, soon find out that the elephant is something very special: with his huge ears Dumbo can fly. And so the elephant quickly becomes a star and thus also attracts the attention of the heavily wealthy entrepreneur V.A. Vandevere (Michael Keaton), who desperately wants to have Dumbo as an attraction for his amusement park. For the circus, this seems to secure the future - but appearances are hugely deceptive.

Dumbo was Disney's fourth feature-length animated film in 1941 and has been one of the all-time animated classics ever since. The story, which celebrates otherness, still touches people nearly eighty years later, and the Oscar-nominated song Baby mine has been covered countless times over the decades, including by Bette Midler and by Art Garfunkle. After Disney has enjoyed great success in recent years with live-action adaptations of its animated films, it now feels like its entire catalogue of classics is being reeled off. This year alone, three of these live-action adaptations are coming to our cinemas, with Dumbo leading the way. It's directed by Tim Burton, who has already successfully reinterpreted Alice in Wonderland.

There's no question that Burton's Dumbo has some truly enchanting moments. The film is captivating for its visuals, which Burton at least managed to put his own unique stamp on in places. But even if the story is told a bit differently here than in the animated film, the big surprises remain. The whole thing plays it too safe to really develop a character all of its own. Yes, it warms your heart when Dumbo looks out from behind one big ear with sad eyes. But the very big emotional impact that actually comes from the story just doesn't want to unfold here.

The actors, especially Danny DeVito and Michael Keaton, deliver wonderful performances. Keaton in particular took obvious pleasure in the role of the villain. Yet somehow the actors keep getting thwarted. It almost seems as if Burton held back convulsively to keep his work not too weird or too dark, but always cute and family-friendly. It's nice to look at, it doesn't hurt anyone, but it also gets forgotten very quickly as a result. And this wonderful classic really doesn't deserve that. So all in all, this is a nice family film that is great to watch and also quite entertaining, but it fails to fly right into the hearts of the audience compared to the animated film. The bottom line is that this is enough for a: Worth seeing!