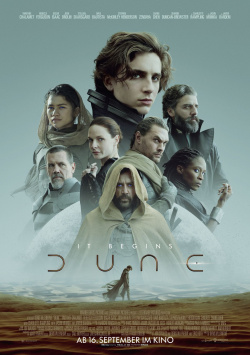 In a distant future, the Harkonnen led by Baron Vladimir Harkonnen (Stellan Skarsgård) have long ruled over the planet Arakis, where they have gained incredible wealth and power from mining Spice. Since then, the Fremen who live on Arakis have been paying a high price for the pirated mining of the raw material that the Empire needs for interstellar space travel. That's about to change when the Emperor decides to have the Harkonnen replaced by House Atreides. Leto Atreides (Oscar Isaac) no longer wants to exploit and subjugate the Fremen, but to form an alliance with the people. But he has no idea that he is only a pawn in a dangerous game of power and intrigue. Meanwhile, his son Paul (Timothée Chalamet) is plagued by mysterious dreams that could be a portent of his very special role in the battle for Arakis....

With "Dune", the more than justly acclaimed director Denis Villeneuve ventures to adapt Frank Herbert's cult sci-fi series about the desert planet. Back in the 1970s, Alejandro Jodorowsky had failed at a big-screen adaptation - even if his unrealized vision had an influence on later classics like "Alien". Then in the '80s, cult director David Lynch brought his version of the story to the screen, but it didn't really do the novels justice. While Lynch's "Dune" enjoys a certain cult status, the sci-fi epic really isn't that good. Two TV mini-series then came closer to the complex book template, but could also only partially convince. So now Villeneuve is trying to finally deliver an adaptation that does justice to the world Herbert created in his books.

There's no question about it: Denis Villeneuve is one of the best directors working today. Films like "Sicario", "Arrival" or "The Woman Who Sings" are impressive testaments to that. With the cult film sequel "Blade Runner 2049", he has also proven that he can not only do science fiction, but that he is also not intimidated by a very high expectation of millions of fans. Villeneuve has a vision for his films and he follows through with it. And that's exactly why his "Dune" convinces across the board. Not only does the film look great, as a lot was shot on real locations and you never feel like you're caught in a CGI storm. The filmmaker also does a great job of building up all the mythology and complex story.

To do this, he uses a very slow-paced storytelling style that definitely challenges the audience. Yes, there are some great action sequences, but overall "Dune" really isn't what you would call a classic popcorn blockbuster. Time is taken here to build characters and tell a story - or rather the beginning of one. And that brings me to my only criticism: Villeneuve presents here the first chapter of his epic, which will only be continued if the film is a financial success. If it fails to do so, the whole thing effectively ends after an extended exposition at the very point where the story really gets going. Let's just hope that not too many people will be deterred by the fact that you should not switch your brain into stand-by mode during the almost two and a half hours like in other blockbusters.

A quick word about the cast: Here, all roles have really been cast quite great. Especially Stellan Skarsgård as the disgusting, power-hungry Baron Vladimir Harkonnen and Rebecca Ferguson as Lady Jessica dominate every scene they are in. But also Timothée Chalamet, who is more and more turning into one of the best actors of his generation, and Oscar Isaac deliver really good performances. Zendaya, who will play a central role later on, is still very much in the background in this film, but the importance of the Chani she plays becomes clear even here.

Fascinating images, an almost hypnotizing soundtrack by Hans Zimmer, an opulent set, almost perfect effects, a great cast and a dramaturgy artfully built in its slowness ensure that "Dune" has become in many ways very, very great cinema not only for the eyes. A film that you really should see in the cinema - also because every ticket you buy brings us one step closer to a second part. And this second part is really needed, so that Denis Villeneuve can present his vision of Frank Herbert's novel to us in all its greatness. Therefore, here is a from me: Absolutely Worth Seeing!!!!