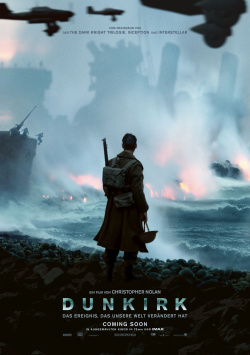 France in the spring of 1940: Over 300,000 Allied soldiers, most of them British, are surrounded by Germans in the town of Dunkirk. Barely 40 kilometres from home, the soldiers hope that they can be rescued by ships from the beach. But only a few ships commanded by Marine Commander Bolton (Kenneth Branagh) are moored at the narrow pier, and support is not in sight. Nevertheless, young soldiers Timmy (Fionn Whitehead), Alex (Harry Styles) and Gibson (Aneurin Bernardi) try to get onto one of the ships. As despair spreads on the beach at Dunkirk, amateur sailor Mr. Dawson (Mark Rylance) and his son Peter (Tom Glynn-Carney) and his friend George (Barry Keoghan) attempt to sail to Dunkirk to rescue as many soldiers as possible in Mr. Dawson's boat. And support also comes from the air: Farrier (Tom Hardy) belongs to a unit of the Royal Air Force, which is to stop the air raids on the beach of Dunkirk in their Spitfires. A merciless battle against time has begun.

It was actually to be expected that Christopher Nolan would not deliver a typical war movie. But given that the second trailer in particular looked rather conventional and didn't necessarily build anticipation for the film, it can definitely be called a surprise with what finesse, elegance and perfection Nolan has directed Dunkirk. He tells the story, based on true events, from three points of view, each covering a different time period. There are the young soldiers' attempts to escape from Dunkirk beach over a period of a week. At sea, three civilians spend a day trying to do their part to save the soldiers. And in the air, Pilot Farrier fights the enemy for an hour. These three perspectives and time levels are artfully woven into a gripping whole that throws the viewer right into the thick of the action from the first minute, only easing the tension a little during the very moving finale.

It's precisely what Nolan doesn't show that makes the film feel so gripping and involving. Shocking images of war are almost entirely dispensed with here. The horror is omnipresent, but still plays out rather blurred in the background or observed from a distance. But it is reflected in the faces of the protagonists in every second. In the film, which was shot in large parts on original locations, dialogues are also rather scarce. But this is hardly noticeable. Because the breathtaking images, the actions of the characters and their facial expressions say more than even perfectly written dialogues could.

The perfect interplay of editing, camerawork, and Hans Zimmer's music keeps the viewer extremely tense. When things get really emotional in a really subtle way towards the end, that tension is released and you're inclined to shed a few tears completely unexpectedly. This is despite Nolan eschewing the usual clichés and any form of sledgehammer symbolism. Dunkirk is, in the truest sense of the word, great cinema, a film that you don't just see, but really experience. Christopher Nolan has once again confirmed his reputation as an exceptional director. Without a doubt one of the best films of the year and therefore also: definitely worth seeing!!!

Cinema trailer for the movie "Dunkirk (USA/Frankreich/Großbritannien 2017)"
Loading the player ...