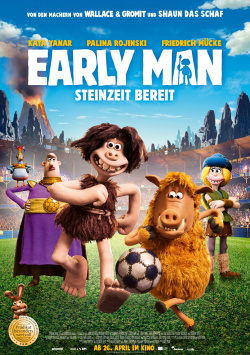 Earth many, many, many years ago: Stone Age Man Dug's tribe (voiced by Frederick Mosquito) lives simply and humbly. Everyone is content - except Dug, who is convinced that there must be more to life than just the everyday hunt for rabbits. When suddenly the Bronze Men, led by the nasty Lord Nooth (Kaya Yanar), show up and want to take away the Stone Age people's land, it's up to Dug and his faithful friend, the wild boar Hognob, to save his people. And Dug already has an idea: He has found out that the ancestors of his tribe possessed an extraordinary talent in the so-called game of football. And so he challenges the arrogant bronze people to an epic game - which he may soon come to regret.

Nick Park, the creative mind behind Wallace & Gromit or Shaun the Sheep, has once again been kneading hard with his team at Aardman Animation. The result is Early Man, the British studio's biggest production to date. For over a year and a half, the movements of the once again very affectionate plasticine figures were recorded in an elaborate stop motion process, spread over various parallel sets. This time, however, more special effects and CGI were used, for example to create the crowds during the football scenes, which would have been far too time-consuming and costly with plasticine figures.

The story is whimsical, but quite funny for long stretches. However, some of the gags do fall relatively flat, so the class of, say, Wallace & Gromit: On the Hunt for the Giant Rabbit is not really achieved. A problem for the German version is that the film lives on a lot of wordplay, which can hardly be transferred into other languages. So the dubbed version is just a little bit weaker than the British original. However, there is still enough to laugh, whereby it is - as with Aardman films actually always - especially worthwhile to pay attention to small details in the background, where not infrequently the funniest ideas are hidden.

The animation fun can score with many original ideas, detailed designed sets and some wonderful slapstick interludes. And the prehistoric boar Hognob, just like the cute bunnies, absolutely has what it takes to be a crowd pleaser. Still, the film ends up lacking some of that very special charm that has made other Aardman films so wonderful. Not quite the big hit, but still really fun for young and old and therefore also: Worth seeing!