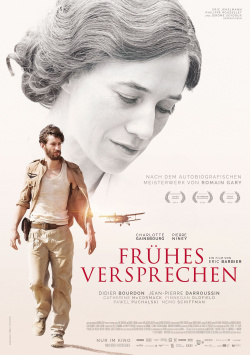 Even during his not-so-easy childhood in Poland, Romain always had it drilled into him by his mother Nina (Charlotte Gainsbourg) that he was special. That he would one day become a great man, a man of note. No matter what setbacks the almost inseparable mother-son team had to suffer, Romain's mother never stopped making it clear to him what he was made of. And so Romain Gary (Pierre Niney) also lives a truly adventurous life that takes him from a World War II pilot to a respected diplomat, a famous writer, and a celebrated filmmaker. All the while, it is the love of his eccentric mother that drives him to strive for even greater things.

Early Promise is now the second adaptation of Romain Gary's autobiographical novel of the same name. Filmmaker Eric Barbier has managed to not only deliver a stirring biopic about a great artist, but also to flesh out the intense mother-son relationship in an original way. There's no question that the film is a drama at its core, but this is repeatedly lightened by occasionally slightly whimsical humor and playful imagery. In this way, the film becomes almost as multi-faceted as the life and work of Romain Gary himself.

Pierre Niney is very well cast as the adult Romain, and so can certainly hold his own with Charlotte Gainsbourg, who acts with full fervor. She makes it difficult for him, but Niney is strong enough as an actor not to be sidelined. He does a good job of making you understand how much Romain was shaped by his mother's love and always strived to live up to it. You can feel his self-doubt and realize how fine the line between unconditional love and grueling hate can be. And so, even as a viewer, you never quite know whether to love and admire her, or to think of her as a terrible mother.

Of course, the film takes some dramaturgical liberties. But it makes this very special relationship palpable, and shows entertainingly as well as visually impressively the impact parents can have on their children's lives. Here and there a little too long and a little tough, but overall a rousing artist biography of a different kind. Worth seeing