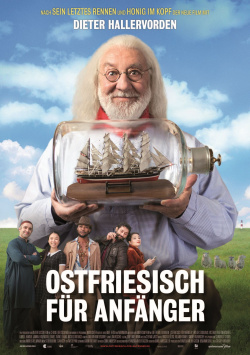 For Uwe Hinrichs (Dieter Hallervorden), who describes himself as the last true East Frisian, things are really not going well at the moment. The franchise company for which he runs a small gas station in his home town of Niederhörn is giving him hell day after day because of his idiosyncratic attitude to work. And the indebted model ship builder is also expected to move out of the house he lived in for many years with his late wife. The only chance he has is a group of foreign specialists, to whom Uwe, of all people, who only speaks Platt on principle, is supposed to give integration lessons. Reluctantly, the stubborn old man agrees to the deal to teach the Utlanders. But it is not long before this threatens to end in total chaos.

East Frisian for Beginners is one of those movies you actually want to like. After all, the story has its heart in the right place. The intentions are good and there are flashes of moments here and there that show how funny and moving at the same time the film could have been. But unfortunately, the screenplay and staging are too weak to adequately realize the respectable ambitions. On the contrary: The comedy is a single collection of clichés that aren't even implemented very well. This starts with the fact that it is too obvious that Dieter Hallervorden doesn't really speak Low German. The Platt seems too artificial and memorized to be really convincing.

This wouldn't be a bad thing if director Gregory Kirchhoff had managed to be playful with the stereotypes he uses. But it's not just that you get the feeling he's never actually been to East Frisia - which would explain some almost infuriating things. It also seems as if he has used the dregs of the oldest cliché box when characterising the Utlanders as well as the naturally right-wing village youth. Of course, there are a few scenes in which one can also smile or moments in which it becomes clear that the story also has a very beautiful, touching side. But in the first place the realization is as flat as the country and the gags as flat as the dialect. And that's a real, real shame.

Dieter Hallervorden has proven, especially in recent years, that he can master roles with depth brilliantly. And so here too he is at pains to make the old stubborn Uwe Hinrichs an interesting, multi-layered character. But he just doesn't want to succeed in doing so, as the script is simply too strongly focused on the stereotypes and clichés that have already been mentioned several times. And so it becomes clear once again that good will alone doesn't make a good movie. And that's why, with the best will in the world, there is only one: Conditionally worth seeing

Cinema trailer for the movie "East Frisian for beginners (Deutschland 2016)"
Loading the player ...