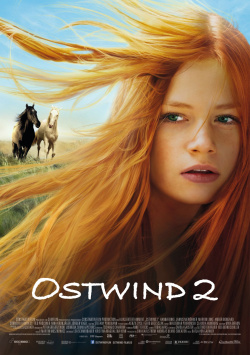 Finally, holidays are here again and Mika (Hanna Binke) has time again to take care of her beloved horse Ostwind. But when she sees him again, the girl is shocked to see that the once so proud stallion makes a rather neglected impression. No one knows where the strange wounds Mika finds on Ostwind's belly came from. And no one has the time or the nerve to take care of them either. Because Kaltenbach is on the verge of bankruptcy. While Maria (Cornelia Froboess) and Sam (Marvin Linke) do everything they can to avert the closure of the riding stable, Mika sets out to find out more about the condition of her horse. In the process, she follows him deep into the forest and makes a surprising discovery: Ostwind meets up here with a free-roaming grey mare that has supposedly escaped from young Milan (Jannis Niewöhner). He makes Mika a tempting offer: if she helps him recapture his horse, he will help her train for an eventing tournament, the victory of which could save Kaltenbach from ruin. But is Milan really telling the truth? And what's the deal with the mysterious mare?

Ostwind 2 actually does everything right as a sequel: the characters and their stories are developed further, while all the elements that made its predecessor so successful and popular are revisited. Horse romance suitable for the target group, packed into very beautifully filmed pictures and carried by likeable actors - exactly what girls between 8 and 12 like to see. Lead actress Hanna Binke has clearly grown into her role in the second attempt. While in the first film she sometimes acted a little awkwardly, this time her performance seems much more confident and sovereign. But also her young co-stars Jannis Niewöhner, Marvin Linke and Amber Bongard can easily hold their own against their more experienced co-stars like Jürgen Vogel, Walter Sittler and Cornelia Froboess.

It is very pleasant that director Katja von Garnier largely refrains from degrading the adult characters to mere joke figures. Much more sensitively, while also very effectively, she shows why children and teenagers so often feel misunderstood by adults and left alone with their worries. This may all be very clichéd, occasionally a bit thick and not told in a particularly profound way. And yet you can tell that there was a director at work here who doesn't want to pander to her young target audience, but who really understands them.

The story itself is nice, mixing humor, mild suspense and even some romance into an entertaining adventure that, especially towards the end, is even more exciting than Mika and Ostwind's first ride across the screen. Katja von Garnier, Hanna Binke and Marvin Linke were able to see for themselves at the Hesse premiere of the film in Frankfurt's CineStar Metropolis, where they were welcomed by many enthusiastic fans. With all these positive signs, it can be assumed that Ostwind 2 will also be a great success. Worth seeing!!!