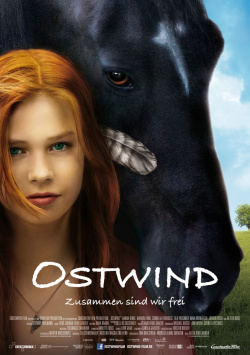 As a teenager you don't have it easy. Mika (Hanna Binke) can really sing a song about that. Not only that her school grades are so bad that she didn't make the transfer. Then she has to take responsibility for her hated teacher's car bursting into flames. The holiday at the holiday camp is cancelled for the time being. Instead, the girl from Frankfurt is sent by her parents (Nina Kronjäger and Jürgen Vogel) to the riding stable of her strict grandmother Maria (Cornelia Froboess). Since an accident, the former Olympic participant is a bitter old woman from whom Mika can hardly expect understanding or affection. And real recreation is not on the agenda either. Instead, Mika is expected to study for hours on end and is only allowed to explore the farm under the constant supervision of stable boy Sam (Marvin Linke). Of course, the rebellious girl does not abide by the rules. When she discovers the wild stallion Ostwind during a nightly foray, she immediately feels a close bond with the animal. Although she doesn't really know anything about horses, Mika has no fear of contact with the stallion, whose fate seems to have been sealed long ago. But the friendship that develops between the girl and the animal could not only change Mika's life, but also save Ostwind's.

Director Katja von Garnier (Bandits, Abgeschmeck) has directed Ostwind, a classic girl's film that tells its story in images dominated by warm Wendy romance. When Mika rides through the wide fields of Hesse with her arms outstretched, accompanied by Ostwind's mane blowing in picturesque slow motion, it really makes the hearts of young horse lovers blossom. While it's slightly annoying for older viewers and simply a sign of bad childhood manners that Mika has a cheeky quip ready in every situation, the heroine's peers in particular are sure to find this behavior extremely cool. For them, the role of the classic outsider and rebel is then not a walking cliché, but an identification figure, which makes the film worth watching in addition to its beautiful riding shots.

So there are quite a few aspects of the film that can't really be called good from an adult's point of view, but which absolutely work for the intended target audience. And therefore, East Wind should be judged as exactly what the film wants to be: harmless horse romance for young girls who see themselves and their very own problems reflected in this film. Of course, the adult characters remain rather one-dimensional there in most cases. And of course events that later seem rather banal are for Mika either a very big catastrophe or the greatest happiness on earth. The world looks a bit different through the eyes of a teenager, and Katja von Garnier has captured that very well.

To be fair, the plotline about the difficult relationship between Mika's mother and grandma Maria is a bit too much of a good thing at the end and slows down the story unnecessarily at its finale. Also, some of the characters are drawn in a very stereotypical way, which is especially noticeable with Mika's rival. But the natural acting of leading actress Hanna Binke, the appealing camerawork and the story, which is really beautifully told for a girl, quickly console over such weaknesses. Precisely because von Garnier dispenses with the humor so typical of German children's films and prefers to tell her film with a lot of emotion, restrained gags and beautiful images, there is then also a bottom line: well worth seeing - at least for girls between 8 and 14 years!

Cinema trailer for the movie "Ostwind (Deutschland 2012)"
Loading the player ...