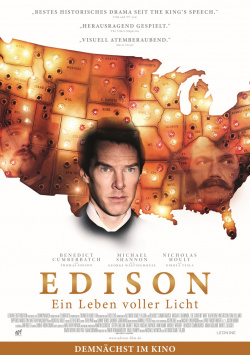 Edison - A Life of Light

Just before the dawn of the 20th century, a competition is sparked to lead mankind into a new age: Eccentric inventor Thomas Edison (Benedict Cumberbatch) is on the verge of illuminating an entire Manhattan street with electric light for the first time. This breakthrough makes him a celebrity overnight. From then on, he has only one goal: to supply the whole country with his electricity. But in his way are not only the lack of finances, but also his competitor, the wealthy entrepreneur George Westinghouse (Michael Shannon). Encouraged by his ambitious wife Marguerite (Katherine Waterson), Westinghouse wants to win the race for America's electricity supply. To do so, he enlists the help of the still-unknown young inventor Nikola Tesla (Nicholas Hoult), who gives the entrepreneur a significant edge in the competition. As more and more cities fall to Westinghouse's alternating current system, the pressure on Edison intensifies: can his invention still prevail, and will he manage to stay true to his ideals in the process?

"Edison - A Life of Light" has had a tough road to its release. Originally, the movie told of the true competition between Thomas Edison's direct current and George Westinghouse's alternating current - the "Current War", which is the original name of the film - was supposed to hit theaters three years ago. But after the allegations against producer Harvey Weinstein, all of the Weinstein Company's films were put on hold and the rights were resold. After some reshoots and costly post-production, the flick was then released in the US and UK in late 2019, but failed to quite win over critics or audiences. Due to the Corona pandemic, the theatrical release in Germany has been further delayed, but now the historical drama also comes to us.

As a biopic, the film actually has some weaknesses, as director Alfonso Gomez-Rejon and screenwriter Michael Mitnick have allowed themselves some clear narrative liberties especially in the characterization of Thomas Edison. But as a historical drama with true backgrounds, the film is quite convincing - just because of the great acting ensemble. Certainly, Benedict Cumberbatch plays once again a quite eccentric role, as he has embodied it so often. And Tom Holland, who already appeared alongside Cumberbatch in the "Avengers", remains a bit pale here. But overall, it's a lot of fun to watch the great ensemble, even if there are dramaturgical lags here and there.

The camerawork is really mesmerizing in places, and the soundtrack is also very atmospheric. So in the end, you're left with a thoroughly positive overall impression, even if it's not particularly lasting. The film is just too conventional for that. But if you simply want to enjoy an entertaining historical drama with a lot of visuals and can accept dramaturgical liberties, "Edison - A Life Full of Light" can definitely be recommended. Worth seeing!

Cinema trailer for the movie "Edison - A Life of Light (USA/Großbritannien 2017)"
Loading the player ...