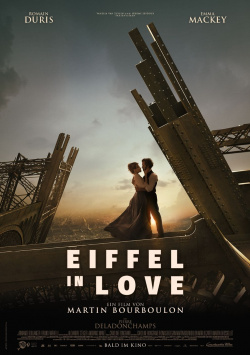 For his work on the Statue of Liberty, French engineer Gustave Eiffel (Romain Duris) has garnered much praise and fame. No wonder that many lucrative offers flutter into his door. For example, he is commissioned by the government to design a spectacular building for the Paris World's Fair in 1889. It was clear to Eiffel that if he accepted the commission, he would create a building that would still be standing many decades after the World's Fair. It should become a real landmark that attracts people from all over the world to Paris. So he designs a tower that will change the city forever. But the construction becomes an enormous challenge that puts Eiffel under pressure, and not just financially. Amidst the turmoil of events, he reunites with his great childhood sweetheart, the now-married Adrienne Bourgès (Emma Mackey), memories of their time together and a resurgent passion threaten to throw him completely off course....

"Eiffel in Love" tells a dramatic love story against the backdrop of a major historical event. This is truly not a new idea, but one that director Martin Bourboulon has executed quite effectively. The images of the construction of the Eiffel Tower naturally contain a lot of goosebump potential - especially because this landmark has an extremely romantic meaning for many people. The filmmaker is obviously aware of this, as he repeatedly creates motifs that make you want to hang them on your wall as posters. The fact that the story itself comes across as rather conventional is of little consequence.

At the side of the usual convincing Romain Duris plays Emma Mackey, who is known in this country especially for her role in the popular Netflix series "Sex Education". While there she plays a non-conformist rebel from a humble background, the French-born actress slips into a completely different role here. But Mackey is also absolutely convincing as a lady from a good family and Eiffel's object of romantic desire. The two have great chemistry, making it easy to understand why the reunion throws the engineer so off course.

Surely: "Eiffel in Love" won't win any major awards in terms of originality, screenplay or acting. But as a great filmed Schmachtfetzen and visually impressive historical epic, the love story in the shadow of the probably most famous tower in the world can fully convince. Despite small lengths and dramaturgical weaknesses, the bottom line here is clearly a: worth seeing!

Cinema trailer for the movie "Eiffel in Love (Frankreich 2021)"
Loading the player ...