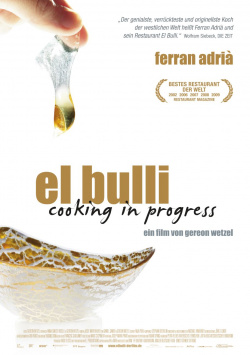 While the sea laps gently against the coast in the Catalan province of Girona and the cicadas chirp at the night sky, El Bulli is bustling with activity. Up to 70 employees ensure that guests at the restaurant, which has been voted the world's best restaurant four times, are offered culinary delights of the highest standard. The restaurant is only open for six months of the year, during which time around 8,000 guests are served - with over 2 million reservation requests. During the other six months, El Bulli chef Ferran Adrià and his team retreat to his cooking lab in Barcelona to tinker with new, special creations.

The challenges are great. After all, no dish is brought to the table in more than one season. And with 28 to 35 courses (!) served to each guest per evening, creativity is paramount. There's freeze-drying, vacuum-packing, spar-frying, deep-frying, steaming and boiling, all the while keeping the natural flavors of the preferably plant-based ingredients intact. You're sure it's going to be good, one of the cooks is asked. No, but I'm experimenting is the answer, which could be emblematic of the philosophy behind El Bulli's success.

The documentary El Bulli - Cooking in Progress follows Adrià and his team over a period of 15 months. The camera of Gereon Wetzel and his team only observes, there are no accompanying interviews or off-screen commentaries. The viewer is directly integrated into the creative process and can witness the creation of a menu sequence from the first experiments to the first serving. Even though there are a few short stretches, especially in the first half, this intimate look into the machinery behind El Bulli's recipe for success makes this documentary highly interesting.

It's fascinating to see what can be pulled out of sometimes quite simple ingredients using a wide variety of molecular cooking techniques. A cocktail is created from water and hazelnut oil, mushrooms are dyed green by vacuuming them in asparagus juice, and even the juice of the sweet potato is to be given completely new sides. Fine ice chips give a dish the decisive touch and ravioli are served whose pasta seems to dissolve in water. While most creations don't even make it through the testing phase, the dishes that do make it to the restaurant's plates continue to delight diners. Despite this success, El Bulli has been closed for the time being since June 2011. Only in two years Ferran Adrià wants to return with completely new, surprising creations.

El Bulli - Cooking in Progress is a very quiet documentary, but alone because of the fascinating insight into this very special culinary world knows how to entertain and makes you want to visit the famous restaurant. But since this dream will probably come true for only a few people, a visit to the cinema is at least an entertaining alternative. Worth seeing