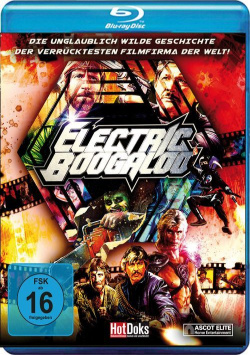 Film: Anyone who grew up in the 80s and was a regular guest in the then still flourishing video stores knows them all too well: Cannon's trash films. Apart from a few real highlights, cheaply produced action and horror films dominated the oeuvre of the cousins Menahem Golan and Yoram Globus. After the two had earned a lot of money with the "Eis am Stiel" films, which were very popular in Germany, they wanted to multiply this in Hollywood. And so they had films made in a hurry which, in their opinion, fully corresponded to the taste of the audience. Quality played a rather subordinate role, as long as there was a lot of action and sex. While many of these films were commercial flops, the producer duo also created some real box office hits and made actors like Michael Dudikoff, Chuck Norris or Jean Claude van Damme real stars.

The rise and fall of Cannon Films is traced in the extremely entertaining documentary "Electric Boogaloo". Starting with the enormous, but also controversial success of "Eis am Stiel" and the first productions in Hollywood up to very special sales strategies, which constantly flushed new money into the cash registers of Cannon Films, the different stages of the company history are dealt with. Of course, the two makers are in the background, but Menahem Golan in particular is the focus of interest. It is almost unbelievable what methods he used to sell films on the international market that did not yet exist or never should have existed, in order to secure the financing of ever new works of art. The many excerpts from these films are extremely amusing, especially from today's point of view, but they are guaranteed to arouse a lot of nostalgia in video store children.

The film also thrives on the fact that all interviewees express themselves very openly and completely unembellished about the productions. What you learn here about Sharon Stone on the set of the "Quatermain" movies, what the interviewees have to say about the Stallone movie "Over the Top" or how the flop of the fourth "Superman" movie is explained is simply refreshingly honest, extremely entertaining and also extremely interesting. A very special story is the creation of a film about the big "Lambada" hype, which illustrates very well how some Cannon movies have been staged and that very few films were really about quality.

However, the fact that the production company also produced some really good works makes the documentary very clear. "Runaway Train" or "Lifeforce - Tödliche Bedrohung" are undoubtedly really good movies, which you want to watch immediately after enjoying the documentary. All in all, "Electric Boogaloo" is an ironic and revealing look behind the scenes of the film business. A film for all who are interested in Hollywood and for all nostalgics who want to travel back to the wonderful time of video store trash food of the 80s and 90s. Absolutely worth seeing!

Picture + sound: The sound is on a good level for a documentary, with interviews, voice-over comments and the music setting the tone here. Surround fireworks should therefore not be expected. Since the film makes use of many archive shots, the quality of the image sharpness has to be reduced again and again. Here and there there there are also some slight soiling, which isn't surprising considering the age of some trailers, archive footage of filming and older interview recordings. The current interviews, on the other hand, are pleasing with a good overall sharpness and a harmonious colour scheme. All in all, there is a satisfied one for the technical implementation: Good!

Extras: As a bonus, the Blu-ray has some edited and extended sequences (approx. 13:15 min.) to offer, including some very worth seeing moments (such as the development of a Spider-Man movie). Other short features include attempts to imitate Menahem Golan (approx. 0:50 min.), Mark's t-shirt collection (approx. 0:41 min.) and a reading from Roy & John's favorite review (approx. 1:30 min.). In addition there is a wonderful trailer collection from the fund of Cannon Films (approx. 51:41 min.), the trailer for the documentary, as well as an Easter Egg. This is especially amusing, as it is a promo reel (approx. 14:47 min.), in which commercials are made with films that were never made (e.g. Cannons Spider-Man or "La Brava" with Dustin Hoffman). Good!

Result: "Electric Boogaloo" is an extremely entertaining documentary about the rise and fall of Cannon Films. With a lot of bite and nostalgia, the film takes viewers back to the golden era of video store trash food. A movie that's just fun. The Blu-ray presents the whole thing in appealing picture and sound quality. The bonus material once again reviews the very special pearls from Cannon Films with an extensive trailer show. absolutely recommended!