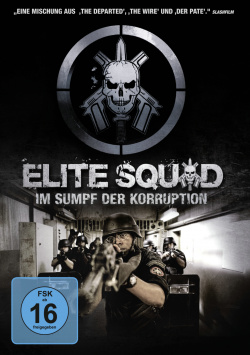 Elite Squad - In the Swamp of Corruption - DVD

Film: With the multi-award-winning Tropa de Elite, which won, among others, the Golden Bear at the Berlinale 2008.Among other things, the Golden Bear at the Berlinale 2008 could win, director José Padilha has created an almost painfully realistic cop thriller, which was actually hard to top in terms of intensity. Now he presents a sequel with Elite Squad - In the Swamp of Corruption, which on the one hand continues the story around Roberto Nascimento consistently, on the other hand uses a very new, somewhat more complex angle than part 1.

Because there the focus was on the everyday work of the military police BOPE and life in the favelas in Rio, the sequel is about the complex network of police, politics and ordinary citizens, dominated by corruption, drugs and violence. The action takes place ten years after the events of Tropa de Elite. Roberto Nascimento (Wagner Moura) is now the head of BOPE. But his professional career has come at a high price, as Nascimento has been living separately from his wife and son for some time. The latter is now dating, of all people, the left-wing civil rights activist Diogo Fraga (Irandhir Santos), who is always a thorn in Nascimento's side, especially professionally. When BOPE police officers shoot prisoners during a prison riot in Rio while Fraga is trying to mediate, this action has consequences. But while Nascimento's former subordinate André Matias (André Ramiro) has to serve as a pawn and leave the BOPE, Roberto is stylized as a popular hero and promoted to head of the surveillance department of the secret service. While he makes powerful enemies in this position in the following years as he tries to fight corruption in Rio's police apparatus, Fraga manages to expand his political power. Even though the two men find themselves in opposing camps, they come to realize that their goals are the same...

Elite Squad - In the Swamp of Corruption is told relatively matter-of-factly from the point of view of Roberto Nascimento. Director José Padilha manages very well to show, through the main character on one side and a dedicated politician on the other, how difficult it is within a corrupt system to maintain one's integrity and never betray one's own ideals. In this respect, Padilha has succeeded in making a very intimate film. In other respects, however, it's much more sprawling and complex than the first installment was. The danger here, of course, is that the story seems overstuffed, confusing and too convoluted. But again, the director has masterfully managed to keep the threads in hand at all times and weave them into a coherent overall picture that keeps the viewer glued to the screen until the very last second.

For even though Elite Squad - In the Swamp of Corruption is a very sophisticated film that shows how the poverty and hopelessness of the people in the favelas of Rio de Janeiro is exploited to make money or gain political power. And yet, the whole thing is also an extremely exciting entertainment film, with some very well executed action sequences and shootouts. Add to that the very good actors and the grippingly staged story - and you have one of the best (political) thrillers of recent times. If you already appreciated Tropa de Elite or generally like sophisticated thriller dramas, you should definitely not miss this home theater premiere!

Picture + Sound: Especially the picture captures the authentic character of the film very well. Reduced coloration and an almost documentary look at times draws the viewer right into the action. Sharpness and black level matching are on a good level with the overall very clean picture. The sound is dominated by the front-mixed dialogue in many scenes, with surround effects such as gunfights providing high dynamics to the action in some scenes. Good!

Extras: As a bonus, there is an extensive making of, but this is only in Portuguese with English subtitles that cannot be hidden. Optional German subtitles are unfortunately not available. Nevertheless, the documentary, which also goes intensively into the true background of the film, is absolutely worth watching!

Conclusion: Elite Squad - In the Swamp of Corruption is far more than a mere sequel. The thriller drama is a gripping, because frighteningly realistic look at a world ruled by violence, corruption and pure selfishness, at the same time it is also a compelling portrait of a man who tries by all means to uphold his ideals and values in this world. A great film, in some ways even better than its award-winning predecessor Tropa de Elite. Absolutely recommended for lovers of sophisticated (political) thrillers!