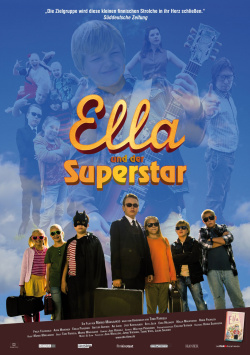 Ella and the Superstar

Ella and her friends are back. After saving their school in Ella and the Great Race, Ella and the Superstar is all about Ella's classmate Pekka (Jyry Kortelainen), who just doesn't feel like going to school anymore. He would much rather become a superstar with the world at his feet. Maybe his idol, the singer Elvira (Malla Malmivaara) can help him. Because it is said that she wants nothing more than to have a child of her own. So she could adopt Pekka, couldn't she? Against all the efforts of the teacher (Eero Milonoff), Ella (Freja Teijonsalo) and her friends decide to help Pekka turn his dream into reality. When a misunderstanding actually turns the boy into a media star and a girl's favorite, the plan also seems to work. Now there is only one obstacle, because Pekka can neither sing nor dance. But does he really have to be able to do that to become a superstar?

With his Ella books, former primary school teacher Timo Parvela has landed a real hit. The children's book series enjoys enormous popularity, and not only in his native Finland. Parvela's very special sense of humour and the endearing stories have ensured that all of the eight volumes to date have been very successful internationally and have even become school reading in Finland. So a film version of the books was naturally only a matter of time. The first film was then also a huge success in Finland, so that part 2 was not long in coming.

Ella and the Superstar is again a rather quirky children's comedy, although this second film lacks the slightly anarchic undertone of its predecessor. The humor in Ella and the Great Race, while always appropriate for children, was extremely inappropriate and original. This is exactly what the second part lacks. It's true that it's also convincing with its satirical look at casting shows and a generation that believes there's a superstar in everyone, even if you don't have any talent. But it lacks that certain bite that makes this comedy stand out from the crowd of children's films.

In addition, the title is a bit misleading, as Ella is clearly no longer the focus of the story and only appears as a narrator for long stretches of the film. Apart from that, Ella and the Superstar is nice entertainment suitable for the target group, but in direct comparison to the first part, the accompanying adults will have little fun. But for all little fans of the predecessor, there are again quirky gags, cool heroes and a funny story that even conveys something similar to a good message at the end. And that is without a doubt enough for a satisfied: worth seeing!

Cinema trailer for the movie "Ella and the Superstar (Finnland 2013)"
Loading the player ...