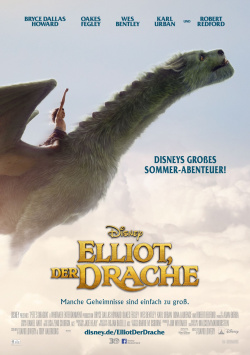 The 1978 children's film Elliot the Smiley Monster is certainly not one of Disney's biggest successes. But for many who saw the film as a child, the charming blend of feature and animated film holds a very special place in their hearts. Who didn't want a friend like Elliot back then, and who wasn't constantly humming the catchy songs from the film to themselves. And so, even today, the adventure of Pete the orphan boy and his dragon Elliot has quite a loyal fan base, large enough to warrant a remake of the film. That's now coming to our cinemas under the name Elliot the Dragon, and it has little in common with the colourful musical from the 70s.

The remake tells the story of little Pete (Oakes Fegley), who, after his parents are killed in a car crash, finds himself living alone in the woods of the Pacific Northwest. All alone? No, because Pete has a great friend who protects him and takes care of him. His name is Elliot and he is a dragon. The two unlikely friends have created their own little idyll, which is suddenly threatened when forest workers begin cutting down trees nearby. All of a sudden, other people are around him - a completely new situation for Pete. But forest ranger Grace (Bryce Dallas Howard) and her young daughter Natalie (Oona Laurence) are able to win the boy's trust, and Pete begins to imagine a life outside the forest. But when some of the woodsmen discover Elliot and try to capture him, events spiral completely out of control.

It's to filmmaker David Lowery's credit that he and co-writer Toby Halbrooks have interpreted the familiar story quite differently, delivering not a classic remake but a complete reimagining. There is little in common between their film and the original, whose underlying tone was much more lighthearted and playful than is the case here. Lowery has directed a thrilling adventure film for kids that has a little bit of humor to offer, but it doesn't go for the really big laughs. For very young dragon fans, this makes the film a little too heavy and dark. But children between the ages of 7 and 11 will surely be thrilled by the adventure of little Pete and his fluffy dragon friend.

For me personally, it's very difficult not to compare this film to Elliot the Smiley Monster. Because that one was my very first feature film and therefore has a very special meaning for me. And of course I was a little bit disappointed by this quite serious remake. Of course, one should steer clear of this direct comparison, since they are de facto two completely different films. But in one aspect the difference is so clearly in favor of the original, so that it must be dealt with here - Albeit with a clear spoiler warning. Because here I refer to the end of the film.

In the original, Pete must say goodbye to Elliot, so that the lovable dragon can help another child who now needs him more urgently than Pete, who has found a new family. As a child, I found this ending very sad, but also beautiful. Because I could believe that Elliot could also come to me if I needed him. And I thought that was a really beautiful notion at the time. The new film lacks such a fantastical aspect to the story. Elliot here is not a magical being who appears whenever a child needs help. The new Elliot is simply a dragon that has lived in the woods for many centuries and returns there in the end. So Pete doesn't really have to say goodbye, but can visit Elliot again whenever he wants to. Anything else could traumatize our kids, after all. This ending is really weak, and leaves the uneasy feeling that the makers were frantically trying to leave a little loophole open for a sequel, had this reimagining become an absolute box office hit - which, at least in the U.S., it hasn't.

Elliot the Dragon is an exciting and well-made adventure film for kids with a lovable dragon and some very nicely filmed scenes. However, the not-so-subtly conveyed message about family and friendship is so full of clichés and served up without any rough edges that the film ends up offering little more than average good entertainment. Disney has by no means succeeded in creating a new classic here. For children over 6 years there is nevertheless a quite clear: Worth seeing!

Cinema trailer for the movie "Elliot the Dragon (USA 2016)"
Loading the player ...