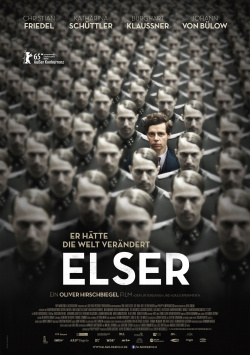 November 08, 1939: Shortly after the end of Adolf Hitler's anniversary speech, a bomb explodes in Munich's Bürgerbräukeller, killing eight people. The Swabian carpenter Georg Elser (Christian Friedel), who was arrested shortly before at the border to Switzerland, seems to be responsible for the attack. Arthur Nebe (Burghart Klaußner), head of the CID at the Reich Security Main Office, and Gestapo chief Heinrich Müller (Johann von Bülow) are to interrogate the man to find out if he really acted alone, as he claims. After Elser has withstood the sometimes extremely brutal interrogation methods for a few days, he gives in and tells his tormentors about what led him to plan an attack on the Führer. But they simply don't want to believe that he acted without backers...

With Elser, Oliver Hirschbiegel once again devotes himself to a true story from the final phase of the Second World War, following Der Untergang. The events surrounding Georg Elser are probably far less familiar to viewers than the story Hirschbiegel traced in his multiple award-winning Der Untergang. What both films have in common is that they are very forcefully staged and tell very important stories in the process. In the case of Elser, this is the fact that not everyone in Germany was a follower, but that there was definitely resistance against the regime. The story is built up in flashbacks in a very comprehensible way. It becomes clear why Georg Elser had the urgent need to act against the injustice he could observe everywhere and why he was willing to sacrifice even his own life for it.

What is highly creditable to Hirschbiegel is the fact that he does not overstylize Elser to a shining hero. Rather, he shows him as a very simple man with weaknesses and ideals that he is not willing to betray. What may seem a bit stubborn at the beginning, reveals itself at the end as an immensely impressive sense of justice, which should still be taken as an example today.

The film is particularly intense in the interrogation scenes, staged like a chamber play, in which all actors involved deliver quite great performances. In the flashbacks, on the other hand, it is quite noticeable that lead actor Christian Friedel is first and foremost a theatre actor. Especially his scenes with Katharina Schüttler sometimes seem a bit artificial, which is absolutely appropriate on stage, but seems a bit strange in the cinema. There is no question that both are very good actors. But what may be impressive and intense in the theatre, seems quite different in the cinema. This will certainly not disturb all viewers, but for some it could lead to the fact that the intensity of the story is weakened thereby a little.

This changes admittedly little in the fact that Elser is a good and also important film, whose history should be known absolutely also younger spectators. Even if Oliver Hirschbiegel won't get the attention with this gripping drama that Der Untergang got, this chronicle of a resistance gets a very clear: Worth seeing!

Cinema trailer for the movie "Elser (Deutschland 2014)"
Loading the player ...