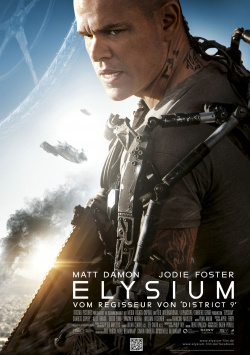 In the year 2154, pollution, overpopulation, and depleted resources mean that Earth is no longer a particularly livable place. As a result, the few people who were still able to maintain their wealth during this time have left Earth and now live on the space station Elysium, an artificial paradise where there is no hunger, no disease, and no crime. Those who can't afford a place in the idyll have to eke out an existence on Earth, struggling to survive every day. For ex-con Max (Matt Damon), this struggle becomes nearly hopeless when he is exposed to a lethal dose of radiation at work and has only five days left before he will die in agony. Max knows that only on Elysium can he still be saved. But a man like him would never be granted entry to the space station because of the harsh immigration laws. But Max is so desperate that he allows himself to be recruited by the gangster boss Spider (Wagner Moura) for a dangerous mission - a mission that Elysium's Defense Minister Delacourt (Jodie Foster), with the help of the ruthless Kruger (Sharlto Copley), is determined to prevent from succeeding at all costs.

In music, there is the phenomenon of the difficult second album. This refers to artists who have made such an impact with their debut that there is an incredible pressure of expectation on the follow-up - after all, this is what decides whether the artist has only been a flash in the pan or whether we can expect qualitatively convincing and commercially successful work in the future. Many filmmakers are also exposed to a similar pressure to succeed once they have made their big breakthrough with a film. In the case of South African Neill Blomkampf, this was his feature film debut Disctrict 9, which not only had great effects but also an interesting and multi-layered story to offer on a fairly low budget. Intelligent science fiction at its best, which thrilled critics and genre fans alike.

The expectations for his follow-up Elysium are accordingly high, especially since Blomkamp here again tells a story set in a dystopian future, which is quite obviously once again enriched with biting social criticism - only this time he was allowed to spend considerably more money and had bigger stars in front of the camera. In the first third, Elysium can fully meet the high expectations. The story is very interesting and has a high potential for suspense. The characters are introduced well, whereby the dramaturgy already enters here some very well-trodden paths.

After the very successful entry, the events take a very predictable course, whereby the story towards the end is increasingly dominated by fast-paced, sometimes a little too shakily staged action. The approaches of social and consumer criticism, which are still very obviously driving the story at the beginning, are almost completely lost here. This is a pity, because the film gives away its potential a bit here, even if the entertainment value itself hardly takes damage.

This remains namely until the end on a very high level. Surely, there are some clichéd twists and also the sometimes quite drastic brutality could offend some viewers. But on balance, the positive aspects clearly outweigh. Visually, the movie is simply great. Not only the space station Elysium or the fighting robots, but also the futuristic favelas are a masterpiece in terms of computer effects and equipment. And also the actors do their best not to be completely pushed into the background by the visual force of the film. Besides Matt Damon, who is convincing as a normal petty criminal with an iron will to survive, especially District 9 lead actor Sharlto Copley delivers a great performance as the brutal psychopath Kruger. Only Jodi Foster remains a little pale, which may also be due to the fact that her character is very cool and emotionless.

Elysium is perhaps not the big hit that one hoped for Neill Blomkamp after District 9. But it is, despite some dramaturgical flaws, still visually stunning, intelligent science fiction that offers the best entertainment without insulting the intellect. And for that, of course, it gets a more than deserved: absolutely worth seeing!