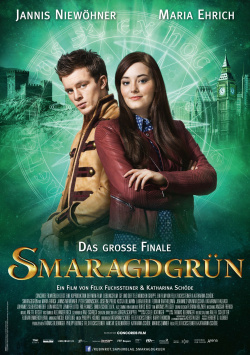 Actually, Gwendolyn (Maria Ehrich) should be fully focused on thwarting the plans of the sinister Count of Saint Germain (Peter Simonischek). But she just can't stop thinking about her great love Gideon (Jannis Niewöhner). Were his feelings really just an act and a means to an end, or does he perhaps love her after all? Even before the romantic fronts are completely cleared up, the two must once again embark on exciting time travel to save the world from the evil machinations of the Count. In the process, they also receive help from Gwen's parents (Josefine Preuß and Florian Bartholomäi) in the past, who want to prepare their daughter for the final confrontation. But what happens next puts not only Gwen's skills but also her emotions to a severe test, requiring an enormous sacrifice from her.

Smaragdgrün is the final part of the Gemstone trilogy based on motifs from Kerstin Gier's bestsellers. As with the second part, it was again directed by Felix Fuchssteiner and Katharina Schöde, who also wrote the screenplay together. This departs even more from the book template than was the case with the previous films. Probably this was done in the hope to give the already somewhat lengthy story a little more pace, suspense and romance. But unfortunately this didn't work out. Because although costumes and decor can convince again, although there are some very nice locations and Maria Ehrich again proves to be a very good choice for the lead role, Emerald Green is by far the weakest part of the trilogy, which in itself started decently.

It's not just that there are some plodding moments where the story keeps going in circles without really being pushed forward. Even the moments of suspense, like the final battle against the evil Count, are staged in a way that is arguably bumpy. You get the feeling that the movie is desperately trying to be a great fantasy adventure without really getting close to that goal. Its tone alone is too unbalanced for that. On the one hand, like the books, the film is aimed at a target audience that is the same age as Twilight or Panem. On the other hand, there are too many gags that seem to be designed more for children. The directors can't seem to make up their minds whether they wanted to direct a children's movie or a Young Adult fantasy romance. This makes for an unbalanced overall picture, which makes all the other weaknesses stand out even more.

The Gemstone Trilogy may not be a masterpiece anyway - either as a book, or as a movie. Nevertheless, despite all the justified criticisms, the first two parts had a decent entertainment value, which was further enhanced by the likeable actors. But even if fans will certainly enjoy this finale, it can not be denied that the quality curve has descended from film to film and has now reached a point that makes the departure of Gwen, Gideon and the others anything but difficult. And therefore applies - even for loyal fans of the trilogy: Only conditionally worth seeing!