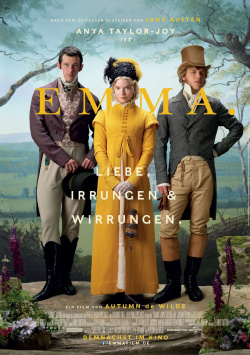 Emma Woodhouse (Anya Taylor-Joy) belongs to better society in a small town in England in the early 19th century - and she knows it full well. She's beautiful, smart, wealthy and also a little too full of herself. No wonder she hasn't found a man good enough for her yet. And so Emma prefers to spend her time setting others up. Her latest mission: to bring the rather unimpressive Harriet (Mia Goth) to the man. Too bad this doesn't go as planned. And then she's maneuvered into unwanted emotional chaos herself.

Many times Jane Austen's classic Emma. has been adapted for television and cinema or been the inspiration for entirely original interpretations, such as the cult teen comedy Clueless. Now another adaptation is coming to the cinemas, which, however, doesn't bring any new aspects to the material. Director Autumn de Wilde tries somewhat convulsively to make the humour a bit quirkier and also a bit modern, but in the process keeps getting lost in a thoroughly conventional production that robs the film of any chance of a unique selling point.

Anya Taylor-Joy, who has revealed a certain versatility in films as diverse as Split or Thoroughbreds, has been recruited for the title role. But she could not convince me here. To me her acting seems too artificial and the dialogues too recited - the whole thing delivered with always the same facial expression. When this finally changes towards the end in a dramatic scene, it seems very unbelievable and almost unintentionally funny.

It's a particular pity that Autumn de Wilde's staging robs the story of the Austen-typical languor factor, which actually makes the story really beautiful. Sure, some of the dialogue is very funny, but it lacks the emotional level, which is crushed here by conventional sterility. This Emma. wants to be different (hence the dot behind the name in the title), wants to be fresh and modern - and in the end is just one of many adaptations of the same material. Not bad, but it's been seen too many times before - and it's been done better. Therefore, the well-deserved "worth seeing" is only given with a few small deductions.

Cinema trailer for the movie "Emma. (Großbritannien 2020)"
Loading the player ...