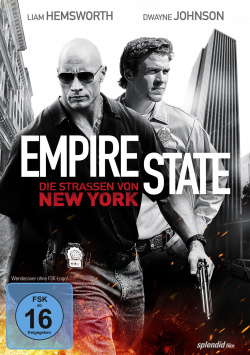 Contents: Queens in 1982: Chris (Liam Hemsworth) dreams of going to the police. But because of a long time ago offence, for which his buddy Eddie (Michael Angarano) was responsible, Chris is not allowed to the police examination. So all he can do is apply for a job at a security company. He won't get any closer to his dream. Despite the rather miserable payment, Chris is happy when he gets the job. After only a few days, when his partner is shot dead in a robbery, he realises that his new job will be very dangerous. As a newcomer Chris is immediately targeted by the investigating detective Ransome (Dwayne Johnson), who soon realizes that the young man has nothing to do with this crime. Chris, on the other hand, doesn't understand that he should risk his life for such a meager salary. Together with Eddie, he forges a plan: he wants to relieve the poorly supervised warehouse of the security company, in which often several million are stored, by a few thousand dollars. Much of this money will go to the widow of his partner who was shot. But Eddie and the small thug Mike (Greg Vrotsos) are planning a much bigger coup - a robbery, which should solve their money worries once and for all into nothing...

"Empire State" is based on a real case around Christos Potamitis, who with his accomplices was responsible for the biggest money robbery in US history and was in prison for it until 1991. The whereabouts of the money have not yet been clarified. Director Dito Montiel ("Fighting", "Kids in the Streets of New York") has created a thrilling drama about friendship, family and unfulfilled dreams out of the real backgrounds, which offers really good entertainment over long distances. With a harmonious, but somehow timeless 80s atmosphere, good actors and some well-done moments of tension, almost all potential boredom cliffs are skilfully avoided, which makes the first half of the movie especially well done.

Was Liam Hemsworth missing a little charisma to be able to wear a movie like this. And also Michael Angarano's efforts to allude against his image of the nice boy seem to be somewhat troubled here and there. Nevertheless, the actors leave a very good impression, which is all the more positive as the movie is first and foremost a character-oriented drama and only secondarily a thriller. As in "Kids in the Streets of New York," Montiel was again concerned with authentic figures, comprehensible conflicts, and a dramatization that was not too exaggerated. But especially in the last third it would have been good for his movie if he had lowered his ambitions a bit and instead put the entertainment value for the viewer into the focus.

For even though "Empire State" is never really boring, at the end you get the feeling that the story would have had the potential for a much more entertaining and better movie. Montiel's version of the events is a masterpiece of craftsmanship, there is no question about it. But the drama can't really leave a lasting impression. Nevertheless: if you can do without a lot of action or nerve-racking suspense and are looking for an entertaining thriller drama that lives more from its story and its characters, then this work can definitely be recommended to you. Worth seeing!

Picture + sound: The 80s atmosphere of the story is very well transported into the home cinema, especially through the colouring, but also through sharpness and contrasts. Real weak points such as clear blurring or soiling cannot be identified. The sound is dominated over long distances by the dialogues and the music, but here and there also well implemented sound effects such as shots ensure pleasant movement in the surround range. Good!

Extras: Until the trailer and other program tips from the provider, the DVD unfortunately has no additional bonus material to offer. Too bad, because more information about the true backgrounds would obviously have been very interesting.

Fazit: "Empire State" is a decent thriller, which gets its entertainment value less from a lot of action or nerve-racking suspense, than from its stirring story based on true events, the good actors and the technically convincing staging. The DVD presents the film in atmospheric picture and sound quality, only the missing bonus material disappoints a little. Nevertheless: for viewers for whom good thriller entertainment is not necessarily accompanied by mass pile-ups or bloody shoot-outs, this home cinema premiere is absolutely recommendable!