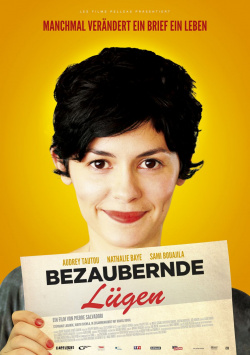 Actually, Jean (Sami Bouajila), who works as a caretaker in the hairdressing salon of the attractive but emotionally hypothermic Émilie (Audrey Tautou), only wanted to express his feelings for his boss with a poetic love letter. But after the anonymous lines have been sent to the trash without any impression, she uses the love letter for completely different purposes: she sends it to her mother Maddy (Nathalie Baye), who is lost in deep depression since she left her husband for a younger one. The emotional words should simply cheer them up a little. That's what Emilie's plan looks like. But when Maddy soon waits for another sign from her anonymous admirer, the worried daughter has to come up with something quickly. And soon not only mother and daughter, but also the shy Jean are in a complete emotional chaos, which threatens to lead to an unexpected outcome...

"Enchanting Lies" is a nice romantic comedy of confusion, which also comes along a little trivial. Director Pierre Salvadori has staged a film with a lot of flair and charm, which brings some very nice ideas and is carried by three charming actors. The problem is that Èmilie in particular is not really likeable. Her first reaction to Jean's love letter seems so arrogant that he is literally wished to meet a woman who appreciates his words. It becomes clear in the course of history that their behaviour can only be attributed to uncertainty and fears. But she never becomes really adorable, so it doesn't help when Audrey Tautou puts on her Amelie smile. Her portrayal is worth seeing and well done, yet the viewer has a hard time getting access to her character.
>
The wonderfully portrayed Jean by Sami Boujila, who quickly wins the hearts of the audience with his reserved manner, is quite different. Especially the scenes between Jean and Maddy, played wonderfully by Nathalie Baye, are undoubtedly among the most amusing moments of the film. The more Èmilie gets entangled in their lies and thus also puts their own happiness at risk, the more Jean and Maddy run to top form. Surely, the whole thing is almost completely unastonishing and sometimes a little over-excited. But here the actors can give free rein to their fun with the story, which can also be transferred to the viewer.

So "Enchanting Lies" has a pleasant entertainment value at the end, which is supported by the beautiful pictures and the charming atmosphere. If Èmilie had been drawn a little more sympathetically and the staging a little more original, there would have been nothing to complain about this romantic confusion comedy. So the film offers all friends of light French comedies only nice entertainment, not more, but not less!