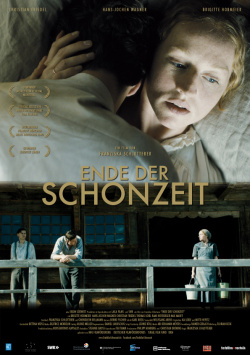 End of the Closed Season

Germany in 1942: Emma (Brigitte Hobmeier) and Fritz (Hans-Jochen Wagner) live a simple but well-adjusted life on a secluded farm in the Black Forest. There seem to be no deep emotions between the taciturn couple, especially since the unfulfilled wish for a son for the farm not only causes additional tensions between the two, but also leads to straight in the village. When Fritz meets the fugitive Jew Albert (Christian Friedel) one night while secretly poaching, he offers the young man his help. Emma meets Albert with prejudice and rejection and is not at all thrilled that Fritz offers the Jew the chance to hide out on the farm for longer if he would help the two of them with their daily chores. But a kind of respectful friendship develops between the men, which is soon put to the test. For Fritz asks Albert to father a child with Emma in his place. A request to which Albert reluctantly agrees only after increasing pressure - with dramatic consequences, the effects of which are still felt many years later.

With her feature debut, End of Closed Season, filmmaker Franziska Schlotterer presents an engaging drama that is based on a really good and exciting idea. Schlotterer manages very well to build up the oppressive and constantly fearful atmosphere on the farm on the one hand, and the slowly developing warmth and passion between Emma and Albert on the other. Emma's discovery of womanhood and the feelings that sex can bring is believably conveyed by Brigitte Hobmeier's good acting. When Fritz waits outside the door until the for him rather mechanical process of creating a progenitor is over, while in the bedroom real passion develops, at least from Emma's side, the film receives an enormous tension, which then also culminates in an appropriate and consistent finale.

However, for all its good and strong moments, the drama also struggles with some weaknesses. For example, the frame story about young Bruno (Max Mauff), who goes to Israel in the seventies in search of his origins and learns about the events on the farm of Emma and Fritz, does not work as well as the main plot. Moreover, there are some moments that seem more like a repetition of what has already been seen and rather weaken the actually intense effect of previous scenes instead of strengthening it. Thus, a few minor lengths arise, which in the end stand in the way of an all-around positive overall impression.

End of the closed season is a well-acted and attractively crafted drama, but also a heavy and sometimes somewhat unwieldy one, which can certainly be viewed in the cinema due to its visual language, but dramaturgically would be better off on television. An interesting and emotionally exciting story is told here but in any case, which is why the film can also be recommended to all viewers who appreciate something dull German art house cinema.

Cinema trailer for the movie "End of the Closed Season (Deutschland/Israel 2012)"
Loading the player ...