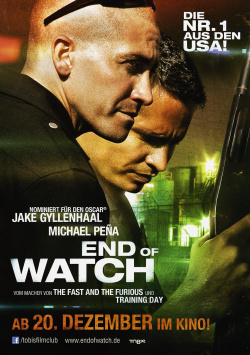 South Central is considered the most dangerous neighborhood in Los Angeles. Where the center of L.A.'s bloody 1992 riots was, violence and gang warfare, especially between Latinos and African-Americans, are still commonplace today. In the midst of this cauldron of witches are the two cops Brian Taylor (Jake Gyllenhaal) and Mike Zavala (Michael Pe&ntilde;a) on patrol and put their lives on the line for their job again and again. But the two friends are absolute professionals, exposed themselves not reckless senseless dangers and thus always manage to provide a little bit of justice in South Central. But when chance throws a drug mule into their hands, leading the cops to a large depot, Brian and Mike turn a powerful drug cartel against them. From then on, the pair's lives hang by a thread, and Big Evil's (Maurice Compte) brutal gang is tasked with making sure it's severed as quickly as possible.

When it comes to cop thrillers, David Ayer, who grew up as a teenager in South Central, really knows his stuff. Whether as a screenwriter (Training Day, Dark Blue) or director (Street Kings), Ayer always skillfully manages to infuse fictional entertainment cinema with elements that feel very authentic. The result is usually extremely exciting, somewhat oppressive and extremely intense. This is also true for End of Watch, which is probably the most realistic film of the filmmaker so far. Yet the very thing that makes the film feel so authentic is also its greatest weakness.

Because Ayer has chosen to present the story in what is currently popularly referred to as a found-footage style. The whole thing consists primarily of video footage that Brian shoots for a study project while he's working. Even though the shaky-cam look can be quite exhausting at times, it also adds to the realism of what's being shown. The whole thing only becomes problematic when the events are shown from a perspective that none of the protagonists could have taken. Here, Ayer lacks a necessary consistency, which robs the film of some credibility and makes us wonder why he chose this style in the first place. Because for sure the whole thing would have been exciting, intense and authentic even with a normal camera work and inconsistent scenes with somewhat puzzling change of perspective could have been avoided.

Besides that, End of Watch can not only be called a very good cop thriller, but also a consistent continuation of David Ayer's work. Not only is Ayer's direction convincing, but so is the strong acting from the cast. As good as Jake Gyllenhaal and Michael Pe&ntilde;a are, it's the supporting cast in particular, who embody gang members and other criminals with almost frightening credibility, that give the film its very special feel and make the events so oppressively real.

Those who appreciate simple-minded thriller fare will easily cut their teeth on End of Watch. The film is exhausting, has an enormous dramaturgical weight and often escapes common narrative patterns, which can leave a somewhat unwieldy impression. But the film is also very intense, magnificently acted and enormously exciting in its own way. Therefore, Ayer's third directorial effort can be warmly recommended to all who appreciate cop thrillers beyond the mainstream. Worth seeing!!!