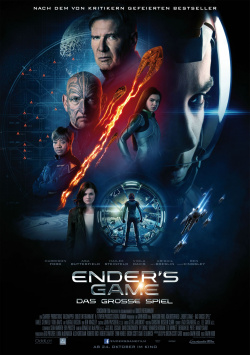 In 1985, Orson Scott Card published the novel The Great Game, which is quickly becoming a modern classic of science fiction literature and one of the top 100 books for teens and young adults. Although not without controversy in terms of its subject matter, the novel and its sequels continue to enjoy enormous popularity today. And so, of course, it was only a matter of time before this popular work would also be adapted for the cinema. With Gavin Hood (Wolverine, Tsotsi) a director was engaged, who was trusted to do justice to the spirit of the original and at the same time to offer the audience entertaining science fiction entertainment with high show values.

Ender`s Game - The Great Game tells the story of twelve-year-old Andrew Ender Wiggin (Asa Butterfield), who grows up in a world still suffering fifty years after a devastating alien attack and the fear that such an attack could happen again. To prevent this, an international military alliance searches for the appropriate military genius to lead a devastating preemptive strike against the Formics, ant-like creatures. Potential candidates are recruited at a young age and must undergo extremely rigorous training, both physically and mentally, to prove their strategic skills and resilience. After Ender's siblings have already failed to withstand this training, Colonel Hyrum Graff (Harrison Ford) is firmly convinced that he has found the perfect candidate in the boy. And indeed, Ender reveals amazing skill in the combat simulator and is able to successfully defend himself even against academy recruits who are less than sympathetic to him. But whether a little boy is really ready to protect humanity forever from the alien threat, may still be doubted despite all his talents.

It is easy to insinuate military propaganda, glorification of violence and moral dubiousness in Ender`s Game - The Great Game. After all, it`s about children being molded into little fighting machines with military drill and humiliation, it`s about manipulating a child`s mind and justifying genocide. All of this is true if you simply consume the story - whether in the novel or the film adaptation - without drilling a little deeper and recognizing the very nuances present that reveal that all that the film appears to be about is, in the end, very clearly condemned. Of course, Hood could have aligned his script a bit more obviously here, so that he wouldn't have been accused of promoting the use of child soldiers in the first place. But even a science fiction film is allowed to ask its audience to think a little and question what is shown far enough.

In addition to these rather drastic criticisms that the book adaptation has to face, there are of course the usual aspects like a certain predictability of the plot, the acting of the actors or the drawing of the characters. There will be many viewers for whom Ender`s Game - The Great Game is simply boring, because the story doesn`t really bring much new and instead of big space battles the hard training of the kids is in the foreground. If you expect to get non-stop action here, you will be bitterly disappointed. And this disappointment then inevitably leads to the fact that you don't care about the characters, that they seem superficial and the acting of the actors seems powerless and unconvincing.

But those who expect a story that focuses on the development of the unassuming Ender into a military genius will realize that Asa Butterfield (Hugo Cabret) in particular delivers a truly convincing performance that, especially towards the end, makes it clear that Ender is precisely not a stone-cold soldier, but always remains a child for whom the cruel reality is simply a game for a long time - until he realizes what consequences his unique talent really has.

For the adaptation, Gavin Hood has taken some great liberties. The book's plotline set on Earth, which focuses on Ender's siblings, has been cut completely. Also, the training lasts only a few months rather than several years, as it does in the movie. While such changes make the story feel a bit more superficial than the novel, it's the decision to only have Ender portrayed by a young actor that is absolutely beneficial to the film. In addition, there are some really great visual effects that make Ender`s Game - The Great Game a visual treat.

So if you can be satisfied with only a few action sequences and if you manage to look beneath the surface of the story, you will be treated to some really great science fiction cinema with this bestselling adaptation. And for these viewers then also applies: absolutely worth seeing!