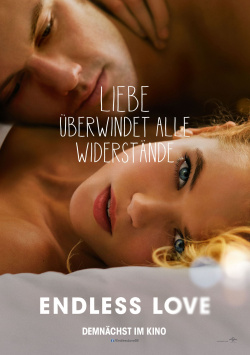 When David (Alex Pettyfer) meets Jade (Gabriella Wilde), a girl from a good home, sparks immediately fly between the two. It doesn't take long for them to become a couple and they could be in for a unique summer of love. But dark clouds soon gather over their young happiness. Because Jade's father Hugh Butterfield (Bruce Greenwood) has big plans for his daughter and he fears that David could thwart these plans. When Jade actually cancels an important internship with a renowned doctor in order to fully enjoy the summer with David, Hugh is convinced that the boy is too bad an influence on his daughter. And although he keeps up appearances to the outside world and pretends to accept David even for his wife (Joely Richardson), behind the scenes he does everything he can to keep the lovers apart. But can true love be torn apart so easily?

Endless Love is already the second film adaptation of the novel Endless Love by Scott Spencer. After Brooke Shields and Martin Hewitt got to ogle each other to the unforgettable sounds of Lionel Richie and Diana Ross in 1981, now Alex Pettyfer (Magic Mike) and Gabriella Wilde (Carrie) must fight for their love under the direction of Shana Feste (Country Strong). Even if Alex Pettyfer remains a bit pale at the beginning, the two main actors are well cast, since they are not required to do much more than look pretty.

Anyway, the film is not much more than a pretty-looking, clinically pure photo love story, which lacks depth in every respect. Instead of a sophisticated dramaturgy, there is only a string of clichés, instead of real passion only boy-free romance - an unintentionally funny sex in front of the fireplace scene included. Accompanied by a soundtrack suitable for the target group, this version of the nice love story doesn't offer any new approaches or even a hint of rough edges. But even if director Feste plays it safe in every moment and every approach of dramaturgical depth is nipped in the bud, especially girls between 14 and 18 years should be able to enjoy the romance.

Because Endless Love, despite all justified criticism, knows very well how to satisfy the so-called Young Adult target group, to which the Twilight books and movies or similar works are also directed. It doesn't take more than a romantic fairy tale with a high pining factor, attractive actors and catchy songs to make the target group's hearts beat faster. The movie never tries to be more than just a simple knitted teen romance. The ingredients needed for this are really well executed in terms of craftsmanship and captured in beautiful pictures. And therefore applies: objectively not a really outstanding work, but very well tailored to the intended target audience and therefore for exactly these young viewers: well worth seeing!