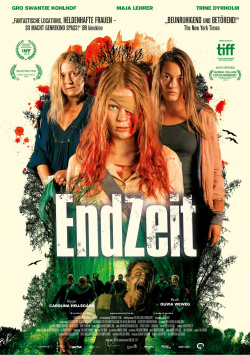 It has been two years since the world was hit by a zombie epidemic. In Germany, only Weimar and Jena have managed to stave off doom. Thanks to a large protective fence, the zombies have so far spared the two cities. 22-year-old Vivi (Gro Swantje Kohlhof) is struggling with her life in Weimar. Together with the tough Eva (Maja Lehrer), the young woman finds herself one day in the dangerous no man's land between the two cities. Now they must fight their way through the apocalyptic landscape together and stand their ground against the zombies, hoping to make it to Jena. But the road there is long and holds a few unexpected surprises in addition to deadly dangers.

Director Carolina Hellsg&aring;rd presents her second feature film with Endzeit. Weimar-based author Olivia Vieweg, on whose graphic novel of the same name the film is based, also contributed the screenplay version of her story. Gro Swantje Kohlhof and Maja Lehrer are a convincing acting duo - all in all, pure female power. That's rather unusual in the zombie genre - and the fact that the whole thing comes from Germany makes it even more special. Especially at the beginning Hellsg&aring;rd succeeds very well in building up a dystopian atmosphere that can easily take on the big competition from Hollywood. There are also some interesting questions explored here that give hope for a zombie flick of a very special kind.

Unfortunately, at some point the film goes off the beaten path a bit too much and degenerates into a fantasy parable about the relationship between man and nature. Especially the mysterious character played by Trine Dyrholm seems a bit alienating in terms of make-up. What the story wants to say here is interesting, but the realization can't completely avoid an unintentional comedy. Good intentions meet a very trashy implementation, which then culminate in a finale that balances somewhere between too conventional and too cheesy.

After a promising beginning, Endzeit unfortunately does not manage to convincingly develop the good ideas. The mystical-fantasy way the story goes at some point takes the fresh wind, which determines the action at the beginning, out of the sails of the film again. Therefore, the bottom line is only with deductions a: worth seeing!